Enterprise Ireland to expand in US following investment surge from Ireland 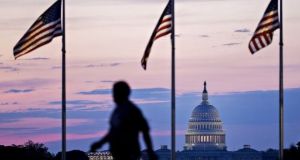 ‘It is very evident to us that the US remains front-of-mind for Irish companies,’, says Sean Davis.

Enterprise Ireland is to open a new office in the US shortly as it seeks to cope with a continued flood of investment by Irish companies in North America.

The State body, which provides support for companies that are expanding outside the Republic, is also considering opening an office in Canada, as companies seek to redirect investment away from the United Kingdom.

The move comes as new figures show that the value of investment by Irish companies in the US in 2017 jumped by 72 per cent, from €85 billion to €147 billion .

According to figures compiled by Enterprise Ireland from a variety of sources, the Republic is the ninth largest source of foreign direct investment to the US.

Standalone data from the US Bureau of Economic Analysis shows the Republic is the fifth largest source of FDI with $328.7 billion on the basis of “country of the ultimate beneficial owner”. This measures not only investment by indigenous Irish companies but also international business with a base in Ireland.

Enterprise Ireland currently operates from offices in New York, Boston, Austin in Texas, Chicago and Mountain View in California. In addition to funding support, the agency also provides assistance with R&D, as well as access to a network of industry-specific contacts.

Among the Irish companies that have a significant presence in the US are Glanbia, Kerry Group, CRH Oldcastle and clinical trials company, Icon.

Sean Davis, regional director North America, Enterprise Ireland, said there were a number of factors contributing to the growth in Irish companies investing in the US, including the strength of the local economy, the increase in direct flights and favourable banking conditions.

“Whether it is growth through acquisition or organic growth that arises after setting up an office on the ground, there are a lot of Irish companies choosing to expand in the US at present,” said Mr Davis.

Earlier this year, the State body revealed that close to 800 companies had operations in the US, collectively employing more than 100,000 people.

The number of client companies that opened new offices in the US in 2017 rose 18 per cent on 2016 to 59 and has continued to grow.

North America currently represents the fastest growing export market for Irish companies, with firms seeing a 19 per cent year-on-year gain in their market share and exports growing to €3.74 billion in 2016.

“All else being equal, we expect continued investment next year. It is very evident to us that the US remains front-of-mind for Irish companies, particularly in the context of Brexit,” said Mr Davis.