Alarm as workers seek a bigger slice of economic pie 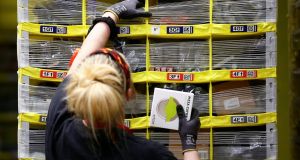 Amazon’s decision to up the pay of some of its warehouse employees (to $15 an hour) has rung alarm bells. Photograph: Lindsey Wasson/Reuters

Unlike US president Donald Trump, President Michael D Higgins doesn’t have a Council of Economic Advisers. Given the powers available to the Irish head of State, it would be tough to justify the expenditure on such bigwigs.

Even though Trump has many levers of economic policy available to him, it’s not clear if he listens to anybody, let alone his formal group of experts. Maybe his council’s expenses aren’t justified either. The economic reports it produces usually amount to more-or-less partisan puff pieces designed to give academic cover to whatever the president is up to. Most are unread, but occasionally a gem comes along and one such has just appeared.

The council’s latest report, a 72-page tome on the evils of socialism, is a curious beast that perhaps reflects at least one of the ways the world is changing: it is moving left. The idea that socialism represents a meaningful threat to America’s ruling classes seems almost laughable.

But the Council of Economic Advisers takes the notion seriously and clearly believes that politicians such as Bernie Saunders are Marxists in Democrat clothing. The council marks the 200th birthday of Karl Marx with a full frontal assault on him and his heirs, especially Lenin and Mao whom they name-check repeatedly. Once again, the ruling elites in America are alarmed by reds under the bed.

There are a number of strands to this. Saunders and others are self-described socialists. But it’s not a form of socialism we would recognise. The main – but not only – battleground is healthcare. I have lost count of the number of otherwise sensible Americans who have told me that government-provided health services mean that I live in a communist country.

This gulf between Europe and the US is as wide as it is deep. It is the key marker of the cultural divide. The British, for example, may be more divided than in living memory over Brexit but are utterly committed to the National Health Service: Monday’s budget will see a Tory chancellor repeat the actions of his previous Labour counterparts with confirmation of a large boost to NHS spending.

The only thing that divides British politicians’ health policies is the size of the spending increase they would allow.

But in the US, the president’s economic advisers are not just worried about socialised medicine. Implicit in their report is a concern that workers may be about to demand a bigger share of the pie.

Trump’s advisers have been widely attacked for their undergraduate understanding – or maybe faith – in how the labour market works. They seem to believe that it operates efficiently and workers get what they deserve. The fact that many people haven’t seen a real wage increase for decades is seen as a normal functioning of the market and, therefore, is an efficient and justifiable outcome. If corporate profits are at all-time highs – and keep growing – at a time of flat wages, well, that’s just the way the cookie crumbles. Nothing to worry about there.

But the report wouldn’t exist if there wasn’t anything for the plutocracy to worry about. That relationship between profits and wages has got a lot of people around the world worried and is seen as a key driver of populism.

Outside of the Washington bubble, it is viewed as something that needs to be addressed. Most obviously, Europe wants to respond with a 3 per cent turnover tax on tech companies in order to make a small step in restoring some kind of balance. There is a battleground between capital and labour and only one side has been winning.

Defenders of the current order argue that workers for successful companies are paid well. This is only partly true. But there aren’t enough of those highly rewarded workers. Compared to the old coal, steel, car and ship-building businesses, Google, Facebook and the rest of the usual suspects essentially don’t employ anybody. It’s the shareholders, the owners, who have reaped the rewards.

Amazon’s decision to up the hourly rate of some of its warehouse employees (to $15 an hour) has clearly rung alarm bells. It might be one small sign that the pendulum is about to swing: whether driven by economic policy or pure politics, the idea that workers deserve more is gaining ground.

That has implications for financial markets. Stock markets are once again in turmoil with the usual talking heads scrabbling around trying to find explanations for something they didn’t see coming.

Equities have been on a tear since 2009. But they do have plenty to worry about. That bull market has led to rich valuations, particularly in the US. Trade wars, bonds (particularly Italian ones) and slowing global growth are all in the frame.

But there is one thing that will alarm investors above all else: workers grabbing a bigger share of the economic pie. If that is something the Trump’s Council of Economic Advisers and others are unable to head off, then the outsized stock market gains of recent years will fast become a distant memory.