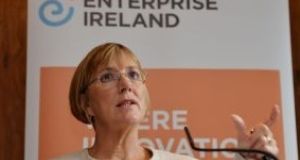 Enterprise Ireland chief executive Julie Sinnamon: “Our strategy is to continue to increase the number of globally diversified Irish companies”

Enterprise Ireland has ramped up its international trade mission programme for the second half of the year as it seeks to help exporters find new markets following Britain’s decision to leave the European Union.

The State body is to almost double the number of ministerial-led missions this year as it seeks to provide additional support to Irish exporters reeling from the Brexit result.

Enterprise Ireland has planned 68 events between July and the end of the year, including ministerial-led trade missions to the US, China, Sweden, India, the United Arab Emirates and Iran.

The full programme of events for the second half of the year also includes inward buyer visits, international trade fairs, embassy events and knowledge seminars.

The missions will be targeted on key growth sectors such as financial services, lifesciences, software, education and food manufacturing.

Overall, there will be 36 ministerial-led trade missions and events in 2016, 26 of them in the latter part of the year. This is almost double the number of such missions in 2015.

“We will now intensify that approach in order to increase the opportunities for Irish exporters to scale their businesses into other global markets continuing to reduce our overall dependence on the UK market,” said Enterprise Ireland chief executive Julie Sinnamon.

“Our strategy is to continue to increase the number of globally diversified Irish companies and we will now firmly focus on opportunities in Northern Europe, the USA, Canada and other high-growth markets including the Middle East and Asia Pacific,” she said.

The presence of a Minister at overseas events is seen as critical for opening doors with potential customers. This is particularly the case in new and emerging markets.

Enterprise Ireland companies increased exports by 10 per cent last year versus 2014, surpassing the €20 billion mark for the first time.