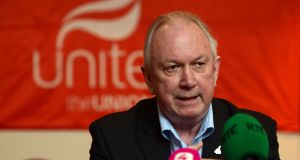 The trade union movement is to mount “a vigorous and robust” campaign in a bid to force the Government to repeal financial emergency legislation which came into force earlier this week.

The legislation allows the Government to impose pay cuts on higher earners, suspend increments for three years and to alter the terms and conditions of employment for public service groups that do not sign up to the Haddington Road agreement.

Delegates at the biennial conference of the Irish Congress of Trade Unions in Belfast heard calls from the Unite trade union for a national day of action in protest at the legislation.

He said a campaign against the legislation was an opportunity for the trade union movement to unite following the internal disagreements over the Croke Park II and Haddington Road process on public service pay.

Mr Kelly said there had been no special powers legislation introduced by the Government to make people at the top pay their taxes or to arrest people who brought the country to disaster.

Impact general secretary Shay Cody said in the public service there was righteous indignation over the fact that the Government had three times come knocking at the door looking for cuts in pay. He said the legislation “must be removed so it does not facilitate successors to this Government to come back a fourth, or fifth time”.

The solidarity of the trade union movement “cannot just be within the confines of public service”, he added.

“While we have gone through terrible times in the public service, have we assimilated the absolute catastrophe there is falling on our colleagues (in the private sector) because of the decisions in relation to the JLC and REA wage setting mechanisms?”

He said financial emergency legislation was quite modest compared to the actions of some private sector employers where negotiations were not about pay cuts or increments, but the threat was of redundancies if proposals were not accepted.

“If walking around town is not a good idea then neither is walking one sixth of the workforce [in the public service] into a battle in which they would be faced with absolutely overwhelming odds.”

He said in such a scenario it would possible for the “other side” to spin the remaining five-sixths of the workforce, including 400,000 who had no job and 800,000 who had employment but no pensions, against public servants.

Dave Hughes of the Irish Nurses and Midwives Organisation said the financial emergency legislation did not only apply for the three-year duration of the Haddington Road deal. He said future negotiations with the Government would take place against the backdrop of the threat of the legislation being applied.

The Labour Party must be told it could not leave power with the financial emergency legislation still on the statute books to be used as a weapon of mass destruction against workers by a future administration.

ASTI delegate Kieran Christie said he was “bloody glad” Tánaiste Eamon Gilmore had not attended the Ictu conference as was originally planned.

He said a Labour Party Minister had dreamed up emergency legislation of a sort that could not have been imagined by the great minds of Ryanair on a bad day.