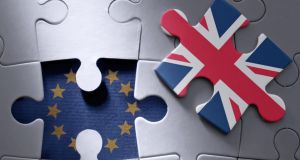 Irish companies’ concerns about the impact of Brexit linger, the latest business sentiment index from KBC Bank and Chartered Accountants Ireland has found.

The mood of Irish companies improved this spring, but many remain in the dark about the potential impact of Brexit, the latest business sentiment index from KBC Bank and Chartered Accountants Ireland has found.

Business activity continued to grow in the first quarter of 2017, albeit at a slightly slower pace, as the Irish economy defied fears of a marked slowdown.

Companies reported ongoing and healthy growth in their activity levels, although there was some easing in the pace of both hiring and output.

“The reality of early 2017 has not been as difficult as was feared,” the report by KBC Bank Ireland chief economist Austin Hughes found.

As a result, the reading on the index climbed to 110.6, up from 104.6 in the previous quarter. This marks the third successive improvement in business sentiment following a sharp weakening last summer.

Concerns about the impact of Brexit linger, however, and confidence remains lower than levels seen in late 2015.

A “small number of companies” have been finding conditions “a little tougher of late”, with Brexit and weak demand the most frequently cited worries.

The slight easing in the pace of growth in the first quarter was particularly obvious in areas such as construction and consumer spending, where exceptionally strong gains had been reported in the previous quarter. The number of companies in the food sector reporting weaker conditions also exhibited “a clear jump”.

The index is based on the responses of 352 senior executives – mainly chief executives, managing directors and finance directors – at Ireland’s leading companies.

While Brexit concerns are felt widely, the expected impact and level of preparedness for the UK’s departure from the European Union varies widely, even between companies in the same sector, said Mr Hughes.

“Only 21 per cent of firms say they have a strong sense of the likely impact of Brexit on their business, but it is concerning that 27 per cent have little sense of the potential effects,” he said.

Some 40 per cent of companies have already taken action in response to last June’s referendum result. In many instances, this took the form of a reaction to the effect of a weaker sterling on their business.

However, while 31 per cent of firms said sterling weakness was having a negative impact on their business, 13 per cent said it was helping theirs.

“These results highlight the complex nature of our economic links with the UK and underscore the major risks in a ‘one approach fits all’ policy in relation to Brexit,” the report warns.

“The rise they are seeing in their own business volumes, allied to better than expected news on the broader Irish economy, is now translating into improving confidence.”

1 Ireland has EU’s most progressive tax system, study finds
2 Who are Ireland’s 17 billionaires?
3 Davos: OECD confident on digital tax deal as France takes swipe at Ireland
4 On your bike: Dropbox backs Dublin Cycling Campaign
5 Aldi to implement living wage for store employees
6 Davos Diary: UCD prof goes batty, Ivanka hits town and Prince Charles takes the stage
7 Are you a Monica, Joey or Chandler when it comes to your data privacy?
8 Fianna Fáil may have just pressed the pause button on the property market
9 Doomsday Clock counting down remaining time left for civilisation
10 Are there annual limits on inheritances or gifts to a child?
Real news has value SUBSCRIBE