Efficiency and simplicity are seldom the goal with international trade rules 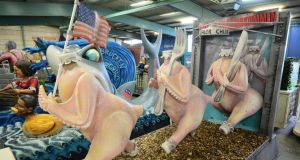 It’s a task that makes sense only by the logic of international trade strictures – which is why negotiators for the EU and the US are eager to change the rules.

In a corrugated metal warehouse next to a barge terminal, crews toil on brand new Mercedes-Benz and Freightliner cargo vans, fresh from assembly lines a few miles away. With the dexterity of thieves stripping a vehicle for parts, they remove each van’s engine, bumpers, tyres, drive shaft, fuel tank and the exhaust system.

Next the crews pack everything into steel freight containers, which begin a journey by river barge and cargo ship to Ladson, South Carolina, near the port of Charleston.

There American teams put the vans back together. Only then can the vehicles be sent onward to Mercedes and Freightliner dealers around the US.

Under the long-standing rules, Daimler, the parent company of Mercedes and Freightliner, avoids a punitive US tariff by performing a token portion of the assembly in the US. It was first imposed on European light trucks during the 1960s in retaliation for German and French trade restrictions on US chickens.

Eliminating decades of cumbersome tit-for-tat restrictions is a major goal of negotiators from the US and the EU at work on the accord, known as the Transatlantic Trade and Investment Partnership (TTIP). They aim to reduce barriers between the world’s two largest trading partners which already exchange $650 billion in goods and services each year.

And yet the pro-trade consensus among political leaders on both sides of the ocean has been threatened lately by accusations that US intelligence agencies planted spies in the German government.

The talks have run into unexpectedly fierce popular opposition. In Europe discussion about the economic benefits of an agreement has been overshadowed by fears that more open trade would expose the continent to what are widely perceived as less stringent safety and environmental standards in the US (And once again, chickens play a big role).

In the US the Obama administration has hit a wall of opposition to trade liberalisation, mostly from congressional Democrats and their union allies, but also from populist Tea Party supporters among Republican lawmakers.

Wolfgang Bernhard, head of Daimler’s trucks and buses unit, was visibly frustrated as he discussed the trade hurdles at his office in Stuttgart, Germany, last month. A pact, he said, would ensure that the US and Europe were not eclipsed by Asian competitors.

“This is an historic opportunity to close ranks and make sure that in the long run our values, our way of living, is going to at least have a strong voice in the world.”

Automakers on both sides of the Atlantic support a pact, although it would expose some to more competition.

“The industry is very much aligned on this,” said Wolfgang Schneider, vice-president for legal, governmental and environmental affairs at Ford of Europe. “When you deregulate there are always risks and opportunities. We think the opportunities outweigh the risks.”

Yet environmental groups are wary, saying they worry that the agreement will be used to dilute auto emissions and safety standards.

The overall debate has turned out to be far more contentious than was expected early last year when both President Barack Obama and Angela Merkel, the chancellor of Germany, gave their blessings to the trade talks.

Few in Washington are optimistic about congressional approval given constituent pressures on lawmakers in both parties. Natacha Cingotti, a corporate campaigner in Brussels for Friends of the Earth Europe, said the political equation was likely to be complicated by the 2016 election season in the US.

“At the pace at which it is moving I have trouble believing they could finish it before then.” – Copyright New York Times 2015