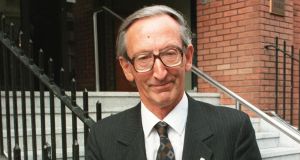 Seán Cromien had a special concern to protect the institution of the Department of Finance. Photograph: Matt Kavanagh

Since the 1970s an important strand of research into how organisations work has emphasised the role of individuals in an organisation and their motivation. For example, when individual bankers were rewarded heavily for making new loans, banks lent far too much money.

However, the scandal of the tracker mortgages shows that, often more important than the incentives for individuals, is the corporate culture. Doing people out of their tracker mortgages generally did not make bank employees better off, yet it happened on a wide scale. The culture of the banks was the problem.

Over decades, the corporate culture in much of the public service has evolved, with a strong emphasis on taking decisions that will be of economic and social benefit to wider society. Obviously there are widely different views on how effective such policies may be or on what the best “interests” of society are.

Seán Cromien, former secretary of the Department of Finance, who died earlier this month, had made public service his vocation. The casual application of theories suggesting that public servants were purely self-seeking infuriated him, not just because he had a broader objective of the public interest, but because the whole ethos of the Civil Service, where he made his career, was dominated by public service.

Within the Department of Finance, where Seán spent most of his career, there were always different views of the public interest. One official in the 1960s was reputed to behave as if he carried the public purse in his back pocket – he said no to everything. Seán, having worked under TK Whitaker, had a rather different approach: he knew that responsibility for economic development was also a critical role for the department. However, when he became secretary in the late 1980s it was at a time of financial crisis and his task was to lead the department in making serious cuts in the least damaging way possible. The recovery of the 1990s reflected the success of this work.

When Seán was first promoted in the late 1950s, promotions were made on the basis of seniority. He worked out his next promotion would occur in 1993, the year before he would retire. He would then be promoted again the year he would retire. Fortunately for Seán and the department, his talents were recognised at a much earlier stage.

Working for Seán in the 1970s and 1980s, I learned a huge amount about both economics and public administration. I can remember his frustration with a senior official, who took the view that the department’s job was to tell the minister the right course of action and, if the minister or the government did not like it, that was their problem. For Seán, as a public servant, it was always necessary, when the best option was rejected, to suggest a second- or even a third-best solution, so that the most satisfactory compromise between economic theory and political reality could be found.

One of the many lessons I learned working for Seán was the importance of checking the evidence, even when you think you know the answer: if the evidence suggests you are wrong then you should change your mind.

I can remember a number of occasions when, as a junior official, I argued with Seán. He sometimes showed impatience by drumming his fingers, but he always listened and, on the minority of occasions when I had a good argument, he would change his mind. He was always open to new ideas.

In the Civil Service of the 1970s and 1980s, decision-making involved a series of memos, with each officer recording their sometimes differing views on the file. Electronic communications have made this process much more rapid but less transparent. Seán, valued the ability to draft recommendations in a cogent and readable style. Frustration with some of our drafting led him to buy us individual copies of Gower’s Plain Words. No doubt the department’s prose style was suitably improved.

Seán had a special concern to protect the institution of the Department of Finance. He was very upset when it was split in 1977, with much of the medium-term policymaking role allocated to a new department. As secretary in the 1980s, he helped restore the department’s key place in economic policymaking.

Having completed a career of public service in the department, in his retirement Seán applied his talents to a range of other areas of the public service, including the National Library and the Department of Education. Ireland is a better place for his life’s work.

Asian shares hold ground as China virus fears persist 07:19
Dear prudence, Thunberg vs Trump and patience is a virtue 06:41
Overlooking the virtue of patience in business comes at a cost 05:30
Davos 2020: Worlds of Trump and Thunberg collide on a Swiss mountainside 05:23
Climate apocalypses, ‘clerical errors’ and an update on the streaming wars 05:20