In laying out its appeal Government has moved to pre-empt the EU Commission, which is expected to give full judgment on €13bn case today 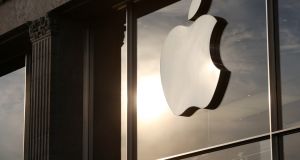 The European Commission ruled last August that Apple should repay €13 billion in back tax due to Ireland. Photograph: Bode Marks/EPA

The Government has moved to pre-empt the expected publication of the full EU Commission ruling on the controversial €13 billion Apple tax case .

In a statement early today, it said the commission had misinterpreted Ireland’s tax laws and wrongly ruled that profits not attributable to activity in Ireland should have been taxed here.

The commission has found that Ireland deliberately decided to forego tax due from the US multinational over many years by giving it favourable tax treatment. But the Government says the commission has misinterpreted Ireland’s tax laws.

In August, the commission ruled that Apple should repay €13 billion in back tax due to Ireland, which it said had given the US tech giant illegal state aid. The Government and Apple are both appealing the decision to the European courts.

The European Commission is expected to publish its full ruling on the case today, although some sensitive commercial details will be redacted. The commission has said that the profits Apple earned in non-US markets should have been taxed in Ireland. It has said the Revenue did not properly apply tax law and did not ensure that Apple followed proper rules in the way it channelled its funds through Ireland.

A key argument made by the commission will be that the Revenue effectively gave the go-ahead in two tax rulings – or opinions – in 1991 or 2007 for a structure that was set up purely to minimise Apple’s tax bill.

The Irish Government said, in a briefing document released today ahead of the expected publication of the commission document, that the commission had fundamentally misunderstood the role of the Apple subsidiaries at the centre of the case. It said these Apple branches carried out routine functions and that all key decisions – and the vital design and development of Apple’s products – were conducted in the US. The profits were thus not taxable in Ireland, the Government said.

What the government published last night ARE the outline of the grounds for its appeal.

In addition to erring in law, the Government has said that the commission had exceeded its powers and interfered with national tax sovereignty.

It accuses Brussels of involving “ novel” tax rules , not following required procedures and failing to provide proper reasons for its decision.

The commission has also examined more than 300 other tax “opinions” given by the Irish Revenue Commission to other companies operating here, effectively giving the Revenue view of how tax would be levied. It is also likely to have sought information on similar cases to that of Apple and some of these may be referenced in the report.