Capital’s housing market may have reached ‘peak affordability’ as median prices rise to €370,000 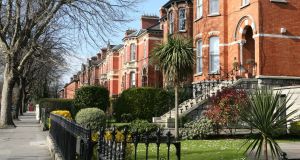 House prices rose just 1.1 per cent in February, with the highest growth on the southside. Photograph: iStock

Dublin’s housing market may have reached “peak affordability” with prices now more than nine times the average salary, a level not seen since the height of the boom.

The price-income multiple is a standard measure of affordability worldwide. In the past an “affordable” home was considered to be three to four times a person’s income. The Central Bank’s mortgage restrictions, which limit people to borrowing 3½ times their income, reflect this measure of affordability. The rapid rise in house prices in recent decades has, however, decoupled this relationship, with buyers requiring many multiples of income to get on the property ladder.

“Some sense of the degree to which affordability constraints may be biting in Dublin at present is suggested by this week’s property price data, which show the median price of a Dublin home at €370,000 is some 48 per cent above the national average,” KBC Bank economist Austin Hughes said.

“More tellingly, this has been running around 9.3 times average earnings and indicates this may have reached peak affordability at this point,” Mr Hughes said.

“With earnings rising around 4.1 per cent in late 2018, the February property price inflation data suggest this may now be a biting constraint on the trend in property prices in Dublin,” he said.

The latest CSO figures show annual headline property price inflation dropped to 4.3 per cent in February, the lowest increase since August 2013. The weaker trend is being led by a softening of prices in Dublin, where year-on-year growth dropped to 1.4 per cent.

Within this, house prices rose just 1.1 per cent, while Dublin apartments were up 1.8 per cent. The highest growth in Dublin was on the southside, where properties were 3.1 per cent more expensive.

The Government says design standards and the planning process have been streamlined to aid development, resulting in a pick-up in housing supply.

“First-time buyers continue to be priced out of the market. Subsidising purchasers through tax breaks is not the answer,” he said in reference to the Government’s help-to-buy scheme.