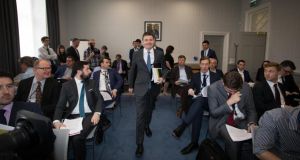 Just as we enter silly season, Paschal Donohoe spoils the party with his Summer Economic Statement – a precursor to Budget 2019. This week’s statement set out his plans to get as close to balancing the books as possible, thus leaving a package of €3.4 billion available to spend, €2.6 billion of which is already committed.

So, some €800 million is up for grabs and no doubt lobby and interest groups are firing up in an effort to secure a piece of what is a relatively small pie.

Nevertheless, Paschal’s pronouncements will likely please economic commentators including the Economic and Social Research Institute, which earlier in the week advised the Minister to steer clear of income tax cuts.

In an effort to avoid overheating the economy further, the ESRI suggested that investment, as prescribed under the National Development Plan, would be preferable.

On a separate but related note, the ESRI played down fears of a bubble in house prices, arguing that price growth was supported by fundamentals in the market.

Central Bank of Ireland governor Philip Lane agreed, noting “strong fundamentals” in the Republic’s housing market, but added that prices will “cool off” over time as supply increased. AIB chief executive Bernard Byrne told the Oireachtas finance committee that house prices will probably fall when demand eventually meets supply at some point in the future.

That will likely come as welcome news to prospective homebuyers, who were told on Thursday that house prices across the State rose by 431 per cent between 1995 and 2007. The resultant boom saw prices dropping by nearly 50 per cent up to 2013.

And it was during that time that Ireland’s construction workers fled elsewhere, a phenomenon that is now coming back to bite us. Business lobby group Ibec noted this week that 80,000 construction workers are required just to meet current demand, with up to 110,000 needed to build the 36,000 houses we need annually.

In this booming economy, it’s clear that Donohoe will have plenty to juggle as he considers where best to dole out his €800 million in spare change.

Can Republic be the backbone of the cloud revolution?

The fiasco involving Apple’s plans to develop a data centre on Athenry’s fields will still be etched on the minds of the inhabitants of the Galway town.

To add insult to injury, to Athenry at least, Apple’s chief executive Tim Cook this week said the tech giant may still locate a data centre here when its requirements dictated that capacity on that front need to be expanded. But it won’t be in Athenry.

Cook’s commitment to his company’s operations in the Republic are positive for the State not least because he dismissed any suggestion that changes to our corporation tax regime would impact its operations here.

Apple’s presence here is a useful one for a Government determined to present the State as Europe’s tech hub.

That determination was helped this week with another tech titan, Amazon, announcing its intention to employ 1,000 people here over the next two years, with the majority of the roles at Amazon Web Services in Dublin.

Taoiseach Leo Varadkar said Amazon’s jobs were exactly what Ireland was looking for, and noted the presence of data centres in Ireland was a good thing, describing them as the backbone of the cloud revolution.

Such a backbone, however, needs to be properly planned and the Taoiseach would do well not to forget the disaster in Athenry.

Although, with new legislation being advanced to reduce time limits for some planning applications, reducing the period to launch judicial reviews of major decisions and tightening the rules for who is eligible to take those reviews, perhaps, in addition to our reputation as a tech hotspot, the Republic will soon be known as the backbone of the cloud revolution.

Fear not, the Anglo blockbuster isn’t over

This week brought the sentencing of David Drumm, the former chief executive of Anglo Irish Bank.

Drumm will serve his penance in what is the longest jail term imposed on an executive of the failed institution after being sentenced to six years inside.

His time in prison in the United States awaiting extradition will be taken off the term and with good behaviour, he could be out in 3½ years.

The former high-flying banker authorised transactions to create a misleading impression that Anglo was €7.2 billion stronger than it was. This was, according to Judge Karen O’Connor, “grossly reprehensible behaviour”.

“Mr Drumm along with others put together a dishonest scheme and engaged in transactions designed to inflate deposits from a non-banking entity to Anglo Irish Bank,” she said.

It’s almost a decade since the bank collapsed and the Irish public is still paying the €29 billion tab from its failure.

Fear not, the Anglo blockbuster isn’t over. The bank’s former auditor, EY, will be subjected to a professional disciplinary tribunal next year at the earliest.

1 We are ‘sale agreed’, but can we go back with a lower offer?
2 Working from home: New costs, new stresses and little relief
3 HSBC board rethinks overhaul and seeks even deeper cuts
4 Joint accounts: if one of us dies, can the other access the money?
5 Eason to lay off 150 staff as it prepares for June reopening
6 Lucinda Creighton’s consultancy agrees partnership with US lobbyist
7 Ryanair almost certain to oppose German government’s bailout of Lufthansa
8 Fruit and vegetable firm obtains interim court orders against technical manager
9 ESB shelves plan for €500m electricity generator at Poolbeg
10 Will remote working mean an end for the corporate HQ?
Real news has value SUBSCRIBE