Dire warnings of need for tax rises and spending cuts 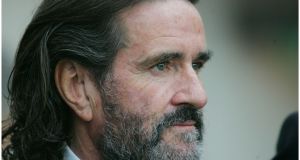 Developer Johnny Ronan: ‘Closing down Bewley’s is very sad but they decided to close it, not me.’ Photograph: Bryan O’Brien

There are dire warnings of the need for tax rises and spending cuts to deliver an economic recovery from the State’s budget watchdog. The chair of the Irish Fiscal Advisory Council, Sebastian Barnes, also told the Sunday Independent that potential coalition partners need to reconsider the “very risky” proposal to keep the pension age at 66 and should look at increases in property and inheritance tax.

In his column for the paper, economist Dan O’Brien writes that the next government faces some of the most difficult decisions ever taken by the State.

Developer Johnny Ronan hit the headlines last week over a social media video of him joking about coronavirus in late February, while at the same time in the spotlight as landlord of Bewley’s landmark cafe on Grafton Street, which announced its closure. “Bewley’s is a very profitable company but they’re trying to blame this on me,” he said. “Closing down Bewley’s is very sad but they decided to close it, not me.”

Covid-19 on travel and work

In its business coverage, the Sunday Independent reports that Dublin Airport operator, DAA, predicts social distancing would cut capacity by 70 per cent. An Post is to temporarily cut parcel rates for SMEs, the paper also reports.

Workers who feel their employers aren’t doing enough to protect them from coronavirus have been encouraged to report them to the HSA, according to the Business Post.

It also reports that Fine Gael and Fianna Fáil plan to block Airbnb hosts from advertising their properties unless they have obtained planning permission.

The Department of Social Protection has refused to pay thousands of people the Covid-19 pandemic unemployment payment after it discovered the applicants were not employed before the scheme was established in March, or were already receiving other social welfare payments, the Sunday Times reports. Meanwhile, the Business Post reports that workers who changed jobs at the beginning of March are not eligible for the State’s wage subsidy scheme.

It also has a story of how US healthcare group Abbott, which employs 4,000 people in Ireland, is in line for a significant deal to supply the State with antibody tests to determine if people have had Covid-19.

Finally, in an interview in the Sunday Independent, broadcaster Joe Duffy explains why, as a contractor, he gets no pension from RTÉ and that his personal pension is “gone again”. “It disappeared 10 years ago with the crash and now with Covid-19. It was invariably in stocks and shares.”