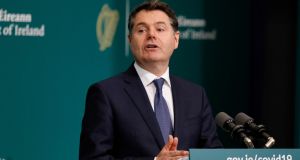 Minister for Finance Paschal Donohoe said the State would have to “lay out the path in how we’ll deal with the issue in a fair and affordable way” over the next “number of weeks”.

The Government is set to examine a range of new supports for the jobs market, as the pandemic unemployment payment and temporary wage subsidy schemes start to wind down. The Minister for Finance, Paschal Donohoe, has indicated that the Government will extend these two supports in some form past their current end-June finish date, but Ministers have said that they cannot continue in their current form in the long term.

Encouraging employers to take people off the pandemic payment and on to their books will be a key goal. It is expected that an extension of a current short-time working scheme will be considered as part of this. Currently designed to support employees put on short-time work, it may be refocused to apply when an employer takes on someone from the Live Register or the pandemic payment scheme on a part-time basis initially. This recognises that in some cases as the economy restarts, the company may not initially be able to afford to pay full-time wages, meaning the employee would receive top-up State payments for a period.

The short-time scheme is one area being examined by the Labour Market Advisory Council, a new body established before the election by the Minister for Employment Affairs and Social Protection, Regina Doherty. It is comprised of labour-market experts and employee and employer representatives and is chaired by ex-OECD executive John Martin.

The wage-subsidy scheme, which generally pays up to 70 per cent of wages of affected employees up to certain limits, is likely to be wound down gradually over a period of time. Consideration could be given to letting it apply longer in some sectors. As the pandemic unemployment payment is wound down over a period, the hope is that companies would re-employ many of the staff who were laid off.

However, this will not be possible in sectors such as tourism in the short term and sectoral supports will be a key issue for consideration, likely to fall to the next government. A key question will be how to direct supports at businesses which have a chance of long-term survival. A number of recent studies have shown that younger employees, many just out of education, have been among the worst affected and special supports are likely to be considered for this group in areas such as retraining, internships and active assistance from State agencies.

Mr Donohoe confirmed on Friday that the Government will lay out a path to deal with the ending of the €350 pandemic unemployment payment in the coming weeks.

In an online conference held by accountancy firm PwC, the Minister said that the State would have to “lay out the path in how we’ll deal with the issue in a fair and affordable way” over the next “number of weeks”.

He noted that “only at the start of this week we made further changes with the wage-subsidy scheme and we need to bed those down”.

Mr Donohoe was responding to questions on whether the payment of €350 was in some cases a disincentive to work.

In a wide-ranging discussion moderated by PwC managing partner Feargal O’Rourke, Mr Donohoe addressed the pace at which the Government is lifting lockdown measures. “I am very aware what the consequences would be if the disease was to strengthen again,” he said.

Mr Donohoe was also asked whether he was concerned by US president Donald Trump’s apparent desire to get pharmaceutical manufacturers back to the US. “At the risk of stating the blindingly obvious, they have a fundamentally different view of global trade and the global economy to their predecessors,” Mr Donohoe said. But, he said that action taken by the US in the past “allowed Ireland maintain and in many cases grow our share of global investment and global jobs”.

“I believe that this Government and future Irish governments will be able to work with President Trump or a future president to sustain American investment in Ireland because I believe we can make a compelling case about why this is in the interest of those economies,” said Mr Donohoe. However, he was keen to stress that trade should be mutually beneficial.