Cost of housing in Dublin up 87% since bottom of market

Increase has accelerated with prices rising 12.8 per cent over past 12 months 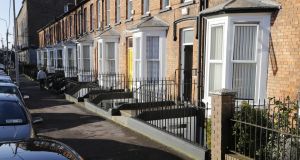 Limerick city. Residential property prices outside of Dublin are 29.9 per cent lower than their May 2007 peak.

The cost of buying a home in Dublin has climbed by 87 per cent since the bottom of the property market in the post-crash period was recorded in 2013, new data has revealed.

The rate at which house prices are climbing has accelerated and rose by 12.8 per cent in the year to the end of September, according to new figures from the Central Statistics Office (CSO).

In Dublin, residential property prices increased by 12.2 per cent in the year to September with house prices climbing by 12.4 per cent and the cost of apartments going up by 11.4 per cent.

The highest house price growth in the capital was recorded in Dublin City, where price climbed by 13.9 per cent. In contrast, the lowest growth was in Dún Laoghaire-Rathdown, with house prices rising 9.9 per cent.

Residential property prices outside Dublin were 13.2 per cent higher in the year to September.

House prices increased 12.8 per cent over the period.

Apartment prices outside Dublin went up by 15.5 per cent in the period.

Overall, the national index is 23.7 per cent lower than its highest level in 2007.

“We’re now very close to a decade on from the financial crisis. Thousands upon thousands of people who would normally have planned to buy a home in the intervening period have not been able to achieve that aspiration,” he said.

Mr Kelly said the State had prioritised the effects of the housing shortage rather than the cause – a lack of supply of new homes.

He said regulations restricting lending and regulations in relation to rents had been prioritised, “all of which have had unintended consequences, such as excluding young people from home buying when property prices were at their lowest”.

A spokesman for KBC said “inadequate supply” remains a key issue. “A modest increase in supply seems to be falling far behind the growth in prospective home purchasers as pent-up demand from recent years now seems to be emerging forcefully.

“In this context, we would highlight a 17.6 per cent increase in the number of home purchase-related mortgage drawdowns in the second quarter of 2017. As the average monetary value of these drawdowns was just 8.1 per cent higher than a year earlier (and consequently falling well short of the increase in average house prices), it appears substantially higher ‘natural’ demand for housing rather than easier credit conditions is a key factor in the recent acceleration in property price inflation.”