Coronavirus: When will Government income and wage supports be cut?

Smart Money: the pandemic unemployment payment will be extended, but not forever 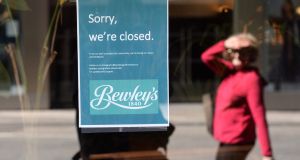 The Government – or its successor – faces a difficult job in plotting the future of the Covid-19 income and wage supports. Due to run out at the end of June, the signals are that they will continue for a bit longer – Taoiseach Leo Varadkar said as much in the Dáil on Thursday. However he added that they could not continue forever. The Minister for Finance Paschal Donohoe has referred to a “ pathway” – presumably one which sees the schemes being phased out at some stage. But how, and when, will be politically incendiary and have a big impact on many people and businesses. Meanwhile, the big rise in unemployment will push the Government into a much more active involvement in the jobs market.

Before the crisis 2.36 million people were in work in the Republic. Now, more than one million of those are on some kind of State income supports. Close to 600,000 are on the Pandemic Unemployment Payment (PUP) of €350 a week. A further 427,000 are having their wages supported by the Government temporary wage subsidy, generally to a maximum of 70 per cent of earnings (with some exceptions) up to €410 a week. To this, in terms of State payments, we can add around 200,000 people who were on the Live Register before the crisis started.

1 Covid-19: NPHET member denies trying to ‘scare people’
2 The more London’s lockdown eases, the clearer the crisis becomes
3 ‘My rent here is so low it’s a joke’
4 ‘Sad day’ for House of Ireland as tourism retailer goes out of business
5 Is Kanye West’s White House bid genuine or a publicity stunt? Or could it be a bipolar episode?
6 Sensational summer food: around the world in 26 dishes
7 Major funding package planned to help schools reopen ‘as fully as possible’
8 Diarmaid Ferriter: How can you be Minister for Media, Tourism, Arts, Culture, Sport and Gaeltacht?
9 Caveat: The tourism sector deserves to be taken more seriously in this crisis
10 Trinity gets ‘Normal People bounce’ with record application numbers
11 Taoiseach needs to show zero tolerance for dubious ministerial behaviour
12 The Irish Times view on Sweden’s laissez-faire approach to Covid-19
13 Coronavirus: Record new cases in US as preventive measures prove divisive
14 Covid-19: Cases increasingly occurring among young people, officials say
15 Paschal Donohoe’s election as Eurogroup president ‘a great win for Ireland’, says Taoiseach
16 Donohoe’s new role puts State at centre of debate over EU’s future
17 Temperatures to hit 20 degrees as (mostly) dry weekend forecast
18 Contrasting sanctions for James Cronin and Robert Powell difficult to reconcile
19 40 great Irish restaurant food boxes to go
20 Work on children’s hospital halted over Covid-19 costs stand-off
21 Monster or machine? Everything we know about coronavirus after six months
22 Departmental shake-up does not bode well for long neglected biodiversity crisis
23 Sweden’s grim Covid-19 result: More death and nearly equal economic damage
24 Water supply problems are not of Irish Water’s making
25 Warning of serious brain disorders in people with mild coronavirus symptoms
26 The €1 billion market: retailers who serve tourists face double trouble in a pandemic
27 What is the going rate for a home in . . . Co Galway?
28 Gardaí investigate allegation of rape in direct provision centre
29 Mary Trump: The inside story of why she wrote a tell-all memoir
30 I watched my dad’s funeral by webcam from France
31 Fauci says some US states should consider shutting down again
32 Credit unions seek new Act to allow them offer ‘real alternative to banks’
33 Two men arrested after €425,000 worth of heroin seized in Cork
34 November Masters plans show Augusta National is out of touch
35 Gardaí raid Irish office of failed German payments group Wirecard
36 Patrick Freyne: A very likable baby with a beard – it’s Zac Efron! – explores the world
37 Donohoe’s new role, House of Ireland shuts, and being indispensable at work
38 A Great British Menu winning dish with Irish potatoes, cheese and onions
39 US supreme court rulings buy valuable time for Trump
40 The movie quiz: ‘Jaws’ appeared in how many James Bond films?
Real news has value SUBSCRIBE