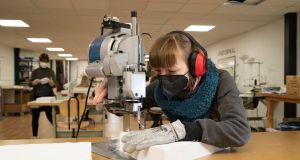 The virus pandemic has infected more than 850,000 people around the globe and forced factories, shops and schools to close amid government-imposed lockdowns.

Factories fell quiet across most of Europe and Asia in March as the coronavirus pandemic paralyzed economic activity, with evidence mounting that the world is sliding into deep recession.

The virus pandemic has infected more than 850,000 people around the globe and forced factories, shops and schools to close amid government-imposed lockdowns.

This has upended supply chains and crushed demand for goods as consumers worried about job prospects rein in their spending and stay indoors. In the euro

zone, IHS Markit’s final March manufacturing PMI sank to lowest since mid-2012, when the currency union’s debt crisis was raging, and well below the mark separating growth from contraction.

The Republic’s manufacturing sector recorded its sharpest decline since August 2009 last month, according to AIB data.

The March AIB purchasing managers index (PMI) survey of Irish manufacturers detailed a sudden severe downturn at the end of the first quarter, with the sector falling firmly into contraction.

Output from Britain’s factories shrank at the fastest pace since the debt crisis as the spread of coronavirus led to a spiraling of delays and hammered business confidence. “With consumers clamping down on all discretionary spending in the current uncertain environment, the manufacturing sector inevitably will struggle further,” said Samuel Tombs at Pantheon Macroeconomics.

Global fund managers polled by Reuters are convinced the world economy is already in recession, similar to economists’ assessments in another Reuters poll. As the prospect of a deep recession grows, traders on Wednesday made a fresh dart for the safety of government bonds, the dollar and gold.

While factories in China gradually restarted operations after lengthy shutdowns and a fall in virus cases allowed the country to start relaxing travel restrictions, activity in South Korea shrank at its fastest pace in 11 years as many of its trading partners imposed dramatic measures to curb the virus’ spread.

“If you look at the Korean numbers, they’re fairly bad ... They’re likely to get worse still because Korea will be dependent on parts from Europe and the United States,” said Rob Carnell, Asia-Pacific chief economist at ING in Singapore. “(Policymakers) have to accept the inevitable that there is a massive global pandemic here, there is an outbreak in almost every country globally and certainly in our region, which is getting to levels that if they don’t take very dramatic action, it’s going to get much worse,” he said. Japan’s factory activity contracted at the fastest pace in about a decade in March, adding to views that the world’s third-largest economy is likely already in recession. A separate “tankan” survey by the Bank of Japan showed business sentiment soured to a seven-year low in the three months to March, as the outbreak hit sectors from hotels to carmakers. “The tankan clearly shows a sharp deterioration in business sentiment and confirms the economy is already in recession,” said Yasunari Ueno, chief market economist at Mizuho Securities.

China’s Caixin/Markit PMI rose to 50.1 last month from February’s record low of 40.3 and just a notch above breakeven mark, while South Korea’s IHS Markit PMI plunged to its lowest since January 2009 when the economy was reeling from the global financial crisis.

Separate figures show unemployment in the euro zone fell to a 12-year low in February, the month before coronavirus containment measures began to be introduced widely across Europe. The jobless rate was 7.3 per cent in the 19 countries sharing the euro zone, the lowest level since March 2008, EU statistics office Eurostat said on Wednesday. However, this is expected to shoot up in March with the onset of lockdown measures across the bloc.

In the 27-member European Union unemployment was 6.5 per cent of the workforce, unchanged from January and so holding at the lowest rate recorded since the start of monthly data in February 2000. Eurostat estimated that 12.047 million people in the euro area and 13.984 million people in the wider EU were unemployed in February, declines of respectively 88,000 and 62,000 respectively.