Coronavirus: Irish exports decline by over €2bn in February 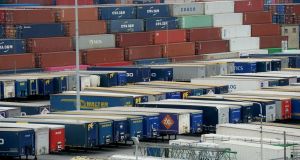 The decline was led by large drops in exports of organic chemicals, down 19 per cent to €2.3 billion, and medical and pharmaceutical products, down 14 per cent to €3.4 billion.

The hit to global trade from the coronavirus is expected to be significant. The International Monetary Fund warned on Tuesday that the world is likely to lose a cumulative $9 trillion (€8.2 trillion) in output over two years – greater than the combined gross domestic product of Germany and Japan.

The CSO figures show exports of electrical machinery, apparatus and appliances increased by €383 million (73 per cent) to €905 million during February. The goods export numbers represent only half of the Republic’s export trade. Service exports, which include the State’s large IT sector, are accounted for in separate data.

The CSO said the European Union accounted for €4.8 billion (42 per cent) of total goods exports in February, of which €1.4 million went to Belgium and €1.2 billion went to Germany. Antwerp in Belgium is a global hub for the distribution of pharmaceuticals.

As the United Kingdom exited the EU on January 31st, the data compares EU trade excluding the UK for both periods for comparative purposes, said the CSO.

Exports to Britain fell by 6 per cent to €1 billion in February and accounted for 9 per cent of total goods exports.

The United States was the main non-EU destination, accounting for just under €3 billion (25 per cent) of total exports in February.

Ryanair hopes to fly 70% of 2019 summer traffic in peak season 15:48
Rio Tinto chairman to stand down amid outcry over cave blasts 15:32
Google promises not to use alternatives to third party cookies 15:15
Car-maker Stellantis sees rebound in 2021 14:42
Dublin Bus to examine developing its prime property sites 13:36