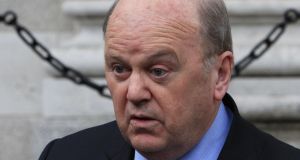 Central Bank governor Philip Lane has raised concerns about the level of economic growth recorded in Ireland for 2015, which has been revised up to 26 per cent by the Central Statistics Office (CSO).

The reclassified rate, nearly four times that recorded in China for the same period, reflected a 102 per cent spike in net exports.

However, the figures appear to have been hugely affected by a number of one-off factors, including activity in the aircraft leasing sector and restructuring by multinational companies involving the movement of patents.

The Irish Times has learned Prof Lane met the CSO on Monday and made known his concerns that the GDP growth figures do not accurately reflect economic activity in Ireland.

A better measure of the underlying growth of the economy was probably provided by consumer spending, which rose by a more modest 4.5 per cent last year.

The changes are unlikely to affect Minister for Finance Michael Noonan’s proposed budgetary adjustment of €1 billion as most of the factors used to calculate 2017 fiscal space have been fixed.

The new figures also reduced the Government’s debt- to-GDP ratio to below 80 per cent from nearly 94 per cent, which has positive implications for Ireland’s sovereign debt rating.

The CSO also released economic data for the first quarter of 2016, which show GDP actually contracted by 2.1 per cent while GNP rose by 1.3 per cent. However, the dramatic one-off factors affecting the 2015 figures make the 2016 first quarter estimate difficult to interpret.