Jobs will double Workday staff in Dublin over next three years 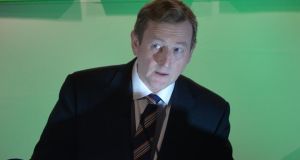 Workday announced its Irish expansion during a visit of Taoiseach Enda Kenny to its head office in Silicon Valley. Photograph: Alan Betson

California-based software company Workday plans to create 200 jobs in Ireland over the next three years, the company announced during a visit of Taoiseach Enda Kenny to its head office in Silicon Valley.

The company is expanding its Irish workforce adding to its three-year commitment in 2012 to create 100 new jobs, which, Workday said, was completed in just over two years due to the company’s strong growth in Europe.

Workday established a European headquarters in Dublin in 2008 and announced the latest expansion plans of its Irish business when the company’s co-founder and chief executive Aneel Bhusri met Mr Kenny in Pleasanton, California.

The new jobs will double the existing 200 staff in Dublin over the next three years.

“Winning international investment in areas like the high growth technology sector is essential to our recovery plan and a testament to our exceptionally talented workforce and our business-friendly environment,” said Mr Kenny.

On the third and final day of his US trade mission, the Taoiseach visited the head offices of internet company Google in Mountain View, California and met with Irish employees of the company. He also visited electric car manufacturer Tesla Motors, networking systems company Cisco, and software analytics company New Relic in Silicon Valley.

Afterwards, Mr Kenny took a tour of the headquarters campus, known as “The Googleplex,” in Google’s self-driving car.

Speaking to reporters afterwards, he described his journey as “quite an experience.”

“I could see opportunities for that, though Irish driver habits would probably need some adjusting to the cultural shock that is involved here.”

Discussing the developments at Google and Tesla, Mr Kenny said that there were “interesting opportunities” in innovation for Ireland and that he expected electric cars to become “very commonplace” over the next couple of years.

At PCH, the Taoiseach was shown a demonstration by Irish tech start-up Drop, which has created a new interactive recipe platform that works with an iPad-connected kitchen scale that serves as a digital baking assistant.

The Taoiseach told the event that Ireland emerging from the EU and IMF bailout programme was “a testament to the sacrifices and commitment of the Irish people to bring about a sense of stability.”

1 Ireland faces 'deep downturn' this year and may not rebound until 2024 if there is a second wave
2 Brexit: System agreed for Irish goods to skip checks on UK trade
3 Why are markets booming when a crash is on the way?
4 Stocktake: Playing poker with the day traders
5 Why UK supermarkets are not making super profits
6 ‘The rental situation stops me moving back home’
7 Power, legitimacy, urgency make potent shareholders
8 OneProjects confirms €11m investment led by LSP and Atlantic Bridge
9 Supreme Court in Dublin clears Bernie Madoff Ponzi loss case for hearing
10 Dunnes Stores trials online ordering from Cornelscourt outlet
Real news has value SUBSCRIBE