But hastily drawn Bill could yet spawn unintended consequences 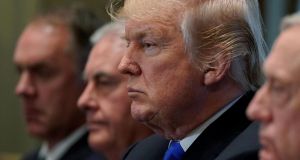 US president Donald Trump specifically called out Ireland as a location to which “American” jobs had moved in the debate over the new US tax Bill. The massive new Bill will change the tax picture significantly for big corporations and in general lessen the tax advantages of expanding overseas. However, while future US foreign direct investment (FDI) may slow a bit, the Bill does not look set to undermine Ireland’s drive to attract or hold on to FDI in any significant way.

A key goal of the Bill is to boost American business and make it more attractive for companies to invest in the US. The corporation tax rate is slashed from 35 per cent to 21 per cent and companies are to be allowed to get immediate tax write-offs for investment, for the next five years. Together with the return of cash held overseas encouraged by new tax rules, “this is likely to to unleash a surge of activity in corporate America,” according to Feargal O’Rourke, managing partner at PwC in Dublin.

There is much debate in the US about the impact of the 500 pages of complex new legislation which some analysts claim may encourage companies to invest overseas in certain cases. However, the underlying drive is to try to keep investment in the US.

“The international tax changes bring the US in line with many other economies,” according to O’Rourke. “There is nothing that will directly impact Ireland’s attractiveness as an FDI hub. And there will be not be any rush to relocate activities or functions back to the US. However, US companies who are at a point of starting to expand outside North America will be in less of a rush to do so than heretofore.”

Trump had originally committed to cutting the US corporation tax rate to 15 per cent, but the compromise 21 per cent figure, to be introduced next year, leaves a bigger gap between the headline US and Irish rates. When state taxes are added, most US companies will face a headline profits tax rate of 26 per cent, compared to 12.5 per cent here. The legislation was hastily drafted and many unintended consequences are likely to become clear in time, according to Brian Keegan, director of taxation at Chartered Accountants Ireland. Companies will take time to examine the measures and how they are implemented, he said, with many relevant for Irish companies with investments in the US, as well as US firms here.

According to Olivia Buckley, communications director at the Irish Tax institute, a new minimum tax on international income from intangible assets such as intellectual property and new anti-abuse tax designed to encourage increased investment at home “will cause US companies to assess their foreign investment decisions more closely in future”.

The new tax on global intangible income will affect decisions on where to locate intellectual property assets, an area where Ireland has had considerable success in recent years. Together with reliefs for IP investment in the US, this will make it more difficult to attract such investment here in future.

UK created jobs at pace in fourth quarter despite Brexit 09:55
Kerry trading profit rises 12.1% in year of mega-deal miss 07:38
Flutter’s planned merger with Stars gets informal approval in Australia 07:27
Finance Ireland’s IPO, Huawei and Irish 5G, and pay rises at Bank of Ireland 06:30
How can I view my dead brother’s will if I’m not the executor? 05:50

1 Provisional liquidator appointed to Dublin engineering firm
2 How can I view my dead brother’s will if I’m not the executor?
3 Kerry trading profit rises 12.1% in year of mega-deal miss
4 Bursting of Tesla bubble a case of ‘not if, but when’
5 Bank of Ireland staff in line for 2.95% pay increase
6 Finance Ireland plans stock market flotation in May
7 Must you pay a price for ethical investment?
8 US reiterates opposition to Huawei equipment being used for Irish 5G
9 Irish Reits would benefit from property funds overhaul, Davy says
10 Flutter’s planned merger with Stars gets informal approval in Australia
Real news has value SUBSCRIBE