Cliff Taylor: A soft Brexit may be only way this contradictory deal can hold together 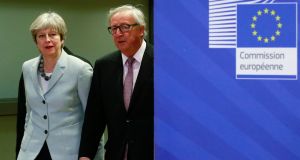 British prime minister Theresa May is welcomed by EU Commission president Jean-Claude Juncker prior to the Brexit meeting in Brussels at which the deal was signed. Photograph: EPA

The deal agreed overnight provides assurances to Ireland about the absence of a hard Border on the island after Brexit in March 2019, though it leaves it open how this will be achieved.

The key issue for Ireland is that it gives the Government important commitments to work with as the talks go on, which both the EU and UK have signed up to.

There is still scope here for much debate in the months ahead.

But Ireland has won important assurances here and the Government will feel it was worth the fight.

Now the real question is about whether the British prime minister can square the circles in what she has signed up to – and actually keep her government together as the talks progress.

You don’t have to look too closely at the text to see the difficulties ahead for the UK as she tries to balance the different wings of her own party and the Democratic Unionist Party, which is propping up Ms May’s administration.

First we should note that everyone has agreed there will be no “ hard border”, but no one has defined precisely what this phrase means.

There may be scope for rows here in the months ahead. However the Irish Government will feel it has made enough progress to improve its position in the arguments to come.

Minister for Foreign Affairs Simon Coveney has said it is clear now that there will be no need for customs checks between North and South after Brexit – and Ireland’s goal as the talks progress will be to ensure that this is actually achieved in whatever emerges. Hours after the deal was struck there was already disagreement about what some of the terms meant in practice, so there are likely to be more battles to be fought.

The text of the deal confirms that the UK’s intention is to leave the EU trading bloc after Brexit – departing from the customs union and the single market. Had the UK remained part of these arrangements, then by definition a Border would not have been needed.

The UK’s determination to leave is why the whole issue of avoiding a Border gets so darn complicated.

It is still not clear how a new trade border will be avoided – remember that the goal at this stage was to achieve “sufficient progress” on this.

However what Ireland feels it has achieved is a “backstop” that if no future EU/UK trade deal emerges which avoids a hard border, both parts of Ireland will still be subject to the same customs and trade rules and regulations, sufficient to avoid a hard border.

The key part of the text says first that the UK wants to achieve the goal of avoiding a hard border via “the overall EU-UK relationship”, in other words a new trade deal.

Given that the UK has committed to leaving the single market and customs unions, wants to escape from EU rules and regulations and intends to do new trade deals with third countries, it is far from clear how this might be achieved.The EU will not let the UK achieve all these goals and still agree to a free trade deal close to what currently applies. And if different trading regimes apply North and South, then a border will be needed.

However, Ireland will hope the text ensures that this will remain largely a UK problem. This is because of the backstop, which says that if a hard Border cannot be avoided via whatever overall deal emerges, then the UK will propose “specific solutions.”

It then goes on to say: “In the absence of agreed solutions, the United Kingdom will maintain full alignment with those rules of the Internal Market and the Customs Union which, now or in the future, support North-South co-operation, the all-island economy and the protection of the 1998 agreement.”

This key paragraph is, presumably intentionally, a bit of a fudge, but it is vital for Ireland.

The phrase “ full alignment” is also important as it does not appear to leave a lot of room for variation, even if some British sources are already disputing how “full” alignment needs to be . If the same trade and customs rules and regulations apply, then no Border is needed.

How this rule of regulatory alignment will be achieved is far from clear – assuming the UK pushes ahead and leaves the EU trading bloc – though Ireland will feel that this is a problem for London.

One way to achieve it would be for the entire UK to effectively mimic the EU rules and regulations, though the EU would have to agree exactly how this would work. This would be a soft Brexit and may be the only way this whole deal can hold together.

However, for the UK, escaping EU rules was a key part of Brexit and mimicking rules set by someone else seems a bad outcome. The UK also wants to do its own trade deals with the US and other countries outside the EU on its own terms.

How will the movement of these goods be controlled at the EU/UK border in Ireland?

A lot of contradictions remain to be unscrambled here.

One way to have helped square the circle would have been some kind of special economic status for the North, under which it would be subject to EU rules and regulations and would diverge from the rest of the UK.

This was left open by the text discussed last Monday, leading to the DUP revolt. The final agreement rules out any new checks on goods between the North and Britain - which would be required if a separate regime applied. Divergence from rules in the rest of the UK can happen, but only when the North’s executive and assembly feel they are necessary.

So of course this is a fudge. All sides have signed up to something, but nobody is clear how it will be achieved. The contradictions may yet provide insuperable problems for the UK government.

But Ireland has achieved significant assurances here which will be valuable as the talks go on.

1 Pilita Clark: The looming legal minefield of working from home
2 Three Ireland switches on 5G network around the country
3 New car prices could rise by up to €10,000 if taxes increase in budget
4 Former junior finance minister to head funds sector lobby group
5 State should use Covid-19 impact on building costs to build homes
6 Me & My Money: ‘Money can’t buy you happiness but it can make life a lot easier’
7 More financial firms setting up or expanding in Ireland despite Covid-19
8 Sprout pivots in pandemic towards takeaway and supplying food retailers
9 Diageo makes strong start to 2021 fiscal year
10 Motor tax hikes, D’arcy quits politics for IAIM, and Sprout’s takeaway pivot
Real news has value SUBSCRIBE