Trump’s US tax reform a significant challenge for Ireland 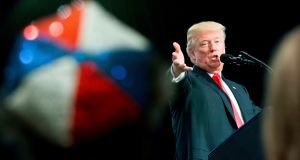 Ireland is facing new challenges in attracting foreign investment due to sweeping changes to US tax rules which are now close to being voted into law after the Senate voted through its tax plan late on Friday evening.

In particular, major US companies will in future find it less attractive to locate valuable intellectual property assets in countries such as Ireland, as under the latest plans income from these assets would be subject to US tax for the first time.

The planned reduction in the US corporation tax rate from 35 to 20 per cent has been on the cards now for some time, but new proposals on taxing the offshore income of multinationals have been included in more recent plans emerging from the US Senate.

It is part of a strategy to encourage more investment in the US, with President Donald Trump saying on Wednesday that the US tax code had for too long incentivised US companies to move significant parts of their operations offshore to countries such as Ireland.

The House has already voted through its plan and the Senate voted through its plan late on Friday, even though some senators were worried about the impact on the US deficit and the plan was criticised by many experts as incoherent and favouring the rich. Negotiations will now take place with the House to come up with an agreed package. One key issue will be the timing of the corporation tax cut, with the House saying it should take place next year and the Senate opting for 2019. The likelihood now is that an agreed deal will be signed into law by Christmas.

Irish tax experts say that the US process is a major move to encourage US firms to invest at home . With the Irish government also facing tax threats from EU moves – including a proposed special tax on digital companies to be discussed by EU finance ministers on December 4th – it seems that the the Irish tax advantages to attract FDI here are facing significant challenges.

“From moving at a glacial pace for the last decade, the US tax reform process is now moving at 100m world record pace in the last few weeks,” said Feargal O’Rourke, managing partner at PwC in Dublin. “There is no doubt that the direction of travel will transform the landscape in the US in terms of corporate tax competitiveness.”

Olivia Buckley, communications director at the Irish Tax Institute, said it was now clear that “we are on the cusp of significant changes to the US tax system. US companies will have a lot more to weigh up in the future before making investment decisions outside the US.” However, she added that major US companies still needed international operations and Ireland remained well placed to attract such operations.

The Irish headline corporation tax rate of 12.5 per cent will still be about half the US rate, counting in the new 20 per cent federal rate and state taxes of about 5 per cent. Peter Vale, tax partner at Grant Thornton, said this meant the cut in the headline rate would not provide a major threat to Ireland.

“Unquestionably the tax reform package will potentially act as a disincentive to US groups looking to set up operations outside the US,” he said. However, he said he did not expect a major adverse impact on US investment here.

One key change proposed in the US plan would have a significant impact on where companies locate intellectual property (IP) assets, which are the copyrights, patents and trademarks from the design and development of products. Big US companies have typically moved IP assets relating to sales outside the US to low-tax countries, or tax havens, as part of tax-avoidance strategies

The Senate plan, responding to these tax-avoidance strategies, is to force companies to include half the income coming from these assets in their US tax returns each year, effectively exposing them to a 12.5 per cent tax. Together with a new charge on tax held offshore, and new measures to encourage investment in the US, this signals a major change.

In recent years major IP has relocated here, due largely to the desire of the big US players to move these assets out of offshore tax havens. However, the new tax charge on income arising from these assets will make the job of attracting this type of investment here more difficult.

“US companies will be less inclined to move their intellectual property offshore,” according to Mr O’Rourke “and the efforts which Ireland has been making to attract this type of FDI will get a lot harder. I don’t believe it is going to have any fundamental impact on the stock and flow of FDI in Ireland but the ‘fixing’ of the US tax system after a decade of trying will have a lot of new and existing US companies thinking in the first instance about ‘America first’.”