Commission ready to clamp down on sweetheart corporate tax deals 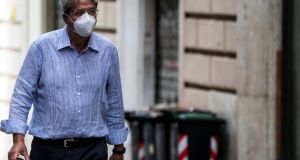 Paolo Gentiloni: “Addressing aggressive tax planning is crucial if we want to have a level-playing field in the single market.” Photograph: EPA

The European Commission is stepping up its campaign against sweetheart corporate tax deals in the EU as pressure builds for companies and wealthy individuals to bear more of the fiscal burden imposed by the deep recessions sweeping Europe.

Paolo Gentiloni, the EU’s economics commissioner, told the Financial Times that Brussels wanted to pressure capitals to root out “structures that facilitate aggressive tax planning” as part of their national reform plans under its €750 billion recovery fund.

The commission has previously identified the Republic among member states whose tax rules are used by companies engaging in aggressive tax planning.

The commission is also pushing ahead with plans to use a little-known EU treaty instrument to clamp down on specific tax measures that distort the single market – although officials do not expect Brussels to come forward with any individual cases until next year.

“Addressing aggressive tax planning is crucial if we want to have a level-playing field in the single market,” said the Italian commissioner, who appears before the European Parliament on Thursday. “We must use all the tools at our disposal to address aggressive tax planning, especially now that we are working on the guiding principles for the implementation of the Recovery and Resilience Facility.”

Tax avoidance by multinationals and high-net worth individuals has shot up the EU’s policy agenda as member states’ pile on debt to pay for the Covid-19 recession. The commission is pursuing a number of tax measures, including the introduction of greater transparency from major corporations, but progress has been blocked on multiple fronts because of the need for unanimous consent from member states on tax matters.

Under the recovery fund, EU governments hit by the pandemic will be given a mixture of grants and loans to support their economies – with the first disbursements of money expected in the spring of 2021. Mr Gentiloni said he would be demanding that national “recovery and resilience” plans submitted to the commission under the recovery fund address national measures deemed to “facilitate aggressive tax planning”.

The commission in May named countries including the Netherlands, the Republic, Luxembourg and Hungary among member states where aggressive tax planning by companies is an issue. This raises the prospect of other member states applying pressure on the named governments to take action against tax avoidance or risk having their reforms plans rejected. Under the rules, a qualified majority of governments need to approve the commission’s decision on whether to grant recovery money. But governments may be reluctant to block other countries’ reform plans for fear of having their own measures blocked in tit-for-tat reprisals.

In July, the commission floated the idea of using Article 116 of the EU treaty to take legal action to stamp out advantageous sweetheart corporate tax schemes if they risked undermining the single market. Crucially, approving cases under that article would require support from a qualified majority of EU governments and cannot be vetoed by a single member state.

“The current legislative procedure can make the adoption of tax proposals extremely lengthy,” said Mr Gentiloni. “So I’m committed to explore the possibilities offered by the Treaties allowing us to move from unanimity to qualified majority voting and the ordinary legislative procedure in taxation.”

Diplomats expect that a number of countries with favourable tax regimes could act as a blocking minority to prevent the commission from launching legal action under article 116, however.

Paul Tang, a Dutch MEP and head of the parliament’s new subcommittee on tax affairs, said the Netherlands “can’t complain about Italy not having sound and sustainable public finances and then block ways to raise revenue from corporates and people that hardly pay any taxes”.

“If the commission plays it carefully and puts one country on the spot, it will be very difficult not to get a majority in the council. This is the perfect time to change tack on tax policy - if it won’t happen this year, it will be in the following years,” said Mr Tang.

The legal and political sensitivities around using Article 116 mean the tool would not be deployed until well into next year. The measure would have to be carefully designed to target specific tax arrangements. Member states would then have to correct the distorting tax schemes or face being sued at the European Court of Justice if they do not comply.

Speaking at an online European Commission tax event on Monday, Benjamin Angel, the director for direct taxation at the commission’s tax directorate general, insisted that Article 116 does not allow tax harmonisation “via the backdoor”.

But it did, he added, have the potential of allowing the commission to address “some distortion to the internal market stemming from practices in some member states”. – Copyright The Financial Times Limited 2020