Cliff Taylor: As a first-time buyer, should you be allowed to borrow more?

We need to concentrate on affordable homes, not unaffordable loans 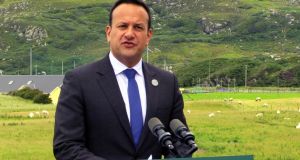 Taoiseach Leo Varadkar needs to be tread carefully on the issue of the Central Bank rules for mortgage borrowers. On Friday, at the MacGill Summer School, he opined that he hoped the Central Bank might change one aspect of the rules, the one which requires first-time borrowers to have a deposit of 10 per cent of the purchase price. This was difficult for those currently paying high rents, he said, and was leaving many people trapped in the rental sector.

It is part of a growing clamour on the bank to change the mortgage lending rules. Ironically, by calling for change, the Taoiseach may have made it less likely to happen. And his timing, with a new governor shortly about to take the reins at the Central Bank, was poor. If the new governor, Gabriel Makhlouf, wants to underline his independence from day one, he may well choose to ignore calls from politicians for change when the rules are reviewed this autumn.