The Chinese government acted decisively, but fears of volatility still stalk the markets 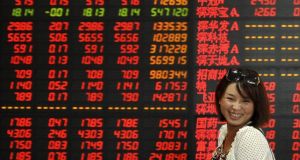 An investor smiles as she walks past an electronic board showing stock information at a brokerage house in Fuyang, China, yesterday. Photograph: Reuters

China’s recent equity market crash and subsequent rocky recovery has investors worried about too much volatility, although most analysts believe the market is fundamentally solid.

At the same time, the government’s response of intervening in the equity market raises questions about whether much-needed economic reforms will happen in the world’s second largest economy.

“It could indicate that government is shifting positions to prioritise growth over reform and also underscores the underlying issue of moral hazard in China’s capital markets,” rating agency Fitch said in a report.

The Shanghai Composite closed at 3,975 points yesterday, finding resistance around the 4,000 level, which the ruling Communist Party said back in April was the start of the bull run.

Since those heady days, the market surged more than 80 per cent; then a bubble appeared to burst, and it lost trillions in value, only for the government to step in with various life-saving interventions.

The government banned major stockholders from selling stakes in listed companies and allowed banks to roll over loans backed by shares, as well as cutting interest rates, suspending initial public offerings and requiring brokerages to buy stocks, backed by cash from the central bank.

The Chinese market is divided into “A-shares”, which until recently only domestic Chinese investors could buy in order to protect local companies from outside influences, and H-shares, which can be bought through the Hong Kong market.

At least 90 per cent of the A-share market is made up of retail investors, while it is reported that some two-thirds of China’s new legion of investors did not finish secondary school.

They have been driven into the stock market to invest because there are relatively few genuine outlets in which to invest in China – bank deposits yield around 2 per cent per year, and the bursting of the property bubble has made the real estate market an unattractive option.

It looks like most of this was borrowed money. By the end of June some 2.08 trillion yuan (€310 billion) worth of borrowed funds was invested on the Shanghai and Shenzhen markets, which put margin- lending at 20 per cent of the total market cap, compared with around 2.5 per cent in the United States.

An April 21st commentary on the market in the People’s Daily newspaper, the official outlet of the Communist Party, urged investors to get into the market and rubbished fears of a bubble because, the commentator said, A-shares were great Chinese companies, “not tulips or Bitcoin”.

“If A-shares are seen as the carrier of the Chinese dream, then it has enormous investment opportunities,” it said as the Shanghai Composite hit the aforementioned 4,000-point level. This, it enthused, was only the start of a bull run.

“Some foreign media have the view that China should prepare for the bursting of the A-share bubble, with which I can’t agree,” ran the commentary. Many investors appear to have read the urgings of the Communist Party’s main organ as clear investment advice, and interpreted the tone as saying the government would intervene if things became difficult.

In the end they did, and the government stepped in to protect the investors.

Sean Yokota, head of Asia strategy at Nordic corporate bank SEB said, one week on, that the financial system and the real economy seemed stable. However, in order for the Chinese market to really function like a genuine market, the government needs to stick to the reform process and open up the capital account.

“Now, this is still not open to private institutions like real money and hedge funds who perform the bulk of the flows but it shows the continued direction of the government to liberalise the financial market and open the capital account. The stock market has not derailed the reform process.”

“We see limited impact from the recent stock market turmoil on China’s financial system stability, given the dominance of banks in the system and their small exposure to the stock market,” she said.

UBS believes any negative wealth effect on household and consumption should also be limited, given equity’s relatively low share of total household wealth (12 per cent at the peak of the stock market rally, up from 7 per cent at end 2013), and given how quickly these gains were made and how much of still remains after the correction.

“However, with new IPOs currently suspended and equity market activity likely to be more subdued in the second half, China’s financial sector contribution to GDP growth may be lowered by up to 0.5 percentage points in the second half,” she wrote.

Fitch said the sharp fall in stock prices and the authorities’ reaction showed how the market was relatively underdeveloped.

News that China’s gross domestic product rose 7 per cent year on year in the first quarter had little impact on the markets, but it did feed into widely held belief that the real economic impact of equity market volatility will be minimal.

“From a systemic level, too, recent volatility and the moratorium on new IPOs raises questions about the potential for the equity market to act as a source of new capital to address the high level of leverage in the economy,” Fitch said in a research note.

It also pointed out how the sell-off highlighted that there may be risks that are not yet visible or exposed, including grey market leverage through wealth management products (WMPs), small trust/finance companies and even some banks.