China and US declare 90-day halt to new trade tariffs 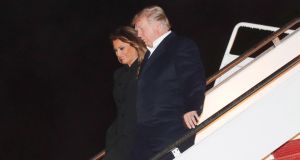 US president Donald Trump and first lady Melania Trump arriving in Maryland, US, after the G20 summit in Argentina

Chinese state media welcomed the decision by presidents Xi Jinping and Donald Trump to set their differences aside, for the time being at least, after the world’s two biggest economies agreed not to escalate a trade war on January 1st.

China and the United States agreed to halt additional tariffs in a deal that keeps their trade war from escalating as they try to bridge their differences with fresh talks aimed at reaching an agreement within 90 days.

The White House said Mr Trump told Chinese president Xi Jinping during high-stakes talks in Argentina that he would not boost tariffs on $200 billion of Chinese goods to 25 per cent on January 1st as previously announced.

Beijing for its part agreed to buy an unspecified but “very substantial” amount of agricultural, energy, industrial and other products, the White House said in a statement. If no deal was reached within 90 days, both parties agreed that the 10 per cent tariffs would be raised to 25 per cent.

“Consensus” was the word of the moment in Chinese state media. The stridently nationalist Global Times newspaper described the ceasefire as an “important consensus”, while the English-language China Daily hailed a “welcome consensus” between the two, while noting that no magic wand had been waved to make the differences between the two disappear overnight.

Over dinner Xi and Trump agreed to start talks on the US’s key complaints about China, and said they would “immediately” start talks on structural changes related to forced technology transfers, intellectual property protection, non-tariff barriers, cybersecurity, services and agriculture.

Facing pressure to resolve the trade dispute before it started to impact on the Chinese economy, Mr Xi has been reaffirming China’s commitment to reform in various speeches over the past few weeks, and he did the same thing at the G20.

“China will continue to deepen market-oriented reform, protect property rights and IPR, encourage fair competition and do more to expand imports,” he told the gathering in Buenos Aires.

China’s foreign minister Wang Yi pointed out how the meeting went on much longer than expected at 2½ hours, and said the leaders had “reached important common understandings and the meeting certainly has charted the course for China-US relations for some time to come”.

The Global Times pointed out that reform of China’s economy required it to lower the market threshold and protect intellectual property rights.

“The needs of the two sides do not stand in each other’s way and a trade war is not a viable option…China is accelerating its reform and opening-up.”

Meanwhile, China Daily’s editorial line was that China would work to resolve the US rational concerns – and backed up its words with actions by agreeing to expand American imports.

“But a lasting improvement in bilateral relations is still dependent on the sincerity of the US to engage in equal-footed consultations with China, bearing in mind the reality of China’s situation,” it said.

Other aspects of their discussion included an indication by Mr Xi that he was open to approving a renewed deal for Qualcomm to buy chip rival NXP, the world’s largest semiconductor takeover.

Qualcomm first offered to buy NXP, which is based in the Netherlands, for €33.6 billion in 2016, but the deal stalled and eventually collapsed after a regulatory deadline was not met.

Mr Xi also agreed to place the synthetic opioid fentanyl, which has been linked to an epidemic of overdose deaths, in a “restricted category” of drugs that would criminalise it. – Additional reporting by Reuters

6 Ireland is 13th most expensive place to live, survey shows