Planet Business: If only what you were seeing and reading wasn’t happening 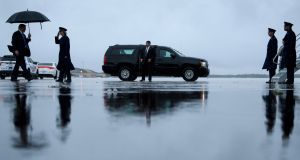 Image of the week: Donald Trump (left) boarding Air Force One at Andrews air force base in Maryland, US. Photograph: Brendan Smialowski / AFP

Number of Ryanair employees in Dublin who have been issued with letters of protective notice after the airline’s board approved a move to cut its fleet by 20 per cent this winter. It laid the blame in part on recent pilot strikes.

Percentage decline in Ryanair’s share price recorded between August 2017, when it reached €19.78, to Tuesday, when it touched down at €13.87.

Profit reported by the airline for the three months to the end of June. The figure was 20 per cent below the same quarter of last year, which chief executive Michael O’Leary attributed to lower air fares, increased oil prices, higher pilot costs, and the timing of the Easter weekend.

Image of the week: Bleak politics

Air Force One awaits Donald Trump at a base in Maryland on Tuesday as the White House’s chief lover of ALL-CAPS headed to Kansas City, Missouri, where he was speaking at a war veterans’ convention. There the verbal lowlight was this nugget: “Just remember, what you are seeing and what you are reading is not what’s happening.” If only.

The city was on lockdown thanks to his visit, prompting the Kansas City Star to advise downtown workers to “probably plan on packing a lunch Tuesday – or call in sick”, which we can all agree is the appropriate level of enthusiasm. One city restaurant said the visit would dampen business for the day, but once Trump departed for airbases new it planned to have a party selling tacos and white Russians for $2 a pop.

Never mind all that pesky negotiating and compromising and understanding basic things like WTO rules, for a Tinkerbell Brexit all you have to do is believe. Those fully signed up to the Brexiteer project posit that the only thing stopping Brexit from being an unmitigated triumph for British sovereignty – destined to bring great things to a UK freed from the evil shackles of Brussels and its worldwide trade agreements – are those naysayers intent on “talking down” Brexit and by extension “Great” Britain, its economy and the will of the British people. If only Remainers would have a little faith in Brexit they would see that Brexit is brilliant. And should it, somehow, not turn out that way, then it will be all their fault for not believing enough.

Getting to know: Tom Edwards

Tom Edwards is a Colorado potter and the creator of a mug featuring the image of a farting unicorn. And there his story would have ended were it not for the fact that it became the “favourite” mug of one Elon Musk, founder of electric car-maker Tesla and one-man headline generator. In June, Musk was accused by Edwards’s daughter of having “ripped off” her father’s copyright by using the electricity-farting unicorn image in Tesla’s in-car interfaces and promotional material without permission or compensation. “What do you have to say for yourself?” she tweeted Musk, which nobody should ever do, though in this case it’s all worked out quite well. The dispute, which Musk had initially declared was “kinda lame”, has been resolved “in a way that everyone feels good about”, according to Edwards, and now he’s “looking forward to getting back to making pots” and selling them in his online store.

Who thinks “tariffs are the greatest!” just like Donald Trump does? Not this lot.

1. General Motors: GM went public on its concerns in June, warning the threatened tariffs on cars and parts would be “detrimental” to the future industrial strength of the US, resulting in fewer rather than more jobs. Smoke and mirrors, declared one of Trump’s trade advisers.

2. Harley-Davidson: The margin-hit Harley is shifting the manufacture of bikes destined for the EU outside of the US to try to avoid the EU’s quid-pro-quo tariff.

3. Toyota: The Japanese company was one of the first out of the traps to warn about the impact of a trade war, saying there would be “no winners” from such a path.

5. Whirlpool: The home appliances manufacturer initially thought US tariffs on imported washing machines would be good for business. But it has since discovered that steel and aluminium tariffs have led to a nasty rise in raw material costs.