Cantillon: Teeing up opportunities in Cuba 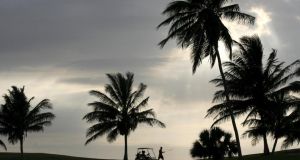 Cuba is on the radar for that most capitalist of investments, a golf course. Photograph: Claudia Daut/Reuters

After years of isolation, the recent thawing of relations between the United States and Cuba is beginning to deliver the prospect of concrete economic returns for the communist island state.

Only this week, the two countries agreed to reopen embassies in each other’s capitals, officially restoring diplomatic relations more than a half century after the countries broke off ties during the cold war.

The economic embargo remains in place, at least for now, but even before the doors open in those diplomatic missions, Cuba is on the radar for that most capitalist of investments – a golf course.

A British property developer London & Regional says it plans to “break ground” early next year on Cuba’s first luxury golf resort, a $500-million project that would be the largest private foreign investment on the island since before Castro’s coming-to-power.

The state enterprise Palmares has a 51 per cent stake in the project. In exchange for its majority stake, Palmares grants land with no property claims attached and allows a renewable 99-year lease on condos and villas.

Aside from an 18-hole course, plans include a marina, 100-room luxury hotel and more than 1,000 privately-owned beach front condominiums and villas.

And it’s not the only high-end golf course investment planned. Palmares signed final papers last month with the Beijing Enterprise Group for a similar project – despite golf coming under the increasingly critical gaze of the new Chinese leadership back home. Three other similar developments are also planned with as yet unnamed partners.

Tourism and property are seen by many businesses as the most interesting investments, and the race is on to get in.