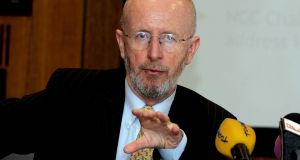 Dr Don Thornhill: suggested a new way of setting the tax based on the funding needs of local authorities

The local property tax is now on life support and the next government will have to make a quick decision about whether to revive it, or kill it off. The legislation to be debated – and possibly enacted – in the Oireachtas on Friday leaves all the questions surrounding the tax completely open.

As former senior public servant Dr Don Thornhill pointed out in a report on the tax last June, completed for the Department of Finance, this is not a sustainable option. Unless the tax is put on a fair basis it will either wither away, or face legal challenges.

The problem now is that two people can be living in houses of the same value with one paying the full tax and one paying nothing at all. Those exempted include anyone who bought a house to live in during 2013, or anyone who has bought a new home since then. These exemptions had been due to end in October 2016. However, the proposed new legislation extends this until October 2019. House prices values are also frozen up to then.

The Thornhill report suggested a new way of setting the tax, based on the funding needs of local authorities. This would start from current property tax levels, so that bills would remain stable, but could rise over time. It was an approach which could have avoided the politically lethal threat of higher property tax bills from 2017 on. The special exemptions should end, he says.

However, even this has been judged too risky. The Bill to be discussed this week kicks all the issues to touch and suggests that the existing exemptions be extended until 2019.

The Thornhill report outlined the dangers. The longer revaluations are left, the harder it is to do them, he warned, as the bigger the jump will be. It points to the gradual destruction of public confidence in the old local authority rates system to back this up. Meanwhile, legal challenges are also possible to clearly unfair regimes, as shown by at least one 1980s challenge to the agricultural rates system.

Unless the new government charts a fair way forward, the local property tax could slowly wither away. So much for widening of the tax base, one of the key lessons from the economic crisis.