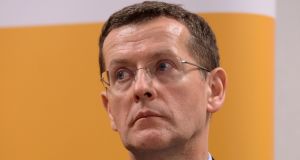 Comptroller and Auditor General Séamus McCarthy: said that, for most public bodies, financial statements should be presented for audit within two to three months of the end of the accounting period. Photograph: Frank Miller

Six public bodies had not produced their 2014 financial statements by the end of the following year, a special report from the Comptroller and Auditor General has found.

In total, some 25 sets of financial statements by public bodies for prior years had yet to be certified by the end of 2015.

The C&AG said education and training boards had a “particularly high” level of arrears, with the 2013/2014 financial statements for nine of the 16 boards not certified by the end of 2015.

These were Cavan and Monaghan, Galway and Roscommon, Kildare and Wicklow, Limerick and Clare, Longford and Westmeath, Louth and Meath, Mayo, Sligo and Leitrim, Waterford and Wexford, and Kerry.

Their first period of account was the 18 months to the end of 2014. By the end of November 2016, all but two of those statement had been certified.

Six higher education bodies were also behind in filing their statements. These were Dublin City University, UCC, UCD, National University of Ireland in Galway, Waterford Institute of Technology and the National College of Art and Design.

The C&AG said a number of factors contributed to these delays, including a requirement by the Higher Education Authority that universities prepare two sets of annual financial statements.

Other bodies identified include the Foyle Carlingford and Irish Lights Commission, the HSE Patients’ Private Property Accounts, the Residential Institutions Statutory Fund Board, and the State Examinations Commission.

The C&AG recommended the Department of Public Expenditure and Reform should consider requiring departments to include a report on the presentation to the Houses of the Oireachtas of financial statements by funds and bodies under their aegis.

The department said it would examine the proposal. However, it said it could take years for the recommendation to become “sufficiently established” given there would be significant burden for Government departments with a large number of bodies under their aegis.

Almost 60 per cent of the 2014 statements certified in 2015 were presented on time. By the end of May 2016, six bodies had not presented their accounts to the Oireachtas. Three have since been presented.

The report examined financial statements for 2014, dealing with almost 300 public bodies and funds in the central government sector with an aggregate turnover of about €193 billion.