Budget 2019: State to spend €286m on transport and infrastructure

New buses for Dublin and ports to be upgraded 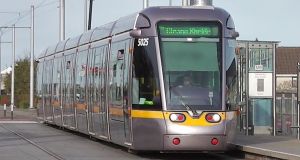 Money is to be spent on expanding the Luas

The Government plans to spend €286 million on roads and other infrastructure next year.

The money is part of an overall €1.4 billion extra that the State will spend on roads, schools, universities and other public projects next year, bringing total Government infrastructure investment to €7.3 billion.

Minister for Finance Paschal Donohoe had earmarked an extra €1.26 billion last year for spending on roads and other transport between 2018 and 2021. “Today, I am announcing that €286 million of this will be made available next year,” he said in this speech.

Mr Donohoe said the Government would spend this on projects such as the Collooney to Castlebaldwin road in Co Sligo, the Dunkettle interchange in Cork city, and work on Knock airport’s runway.

The Minister added that the Government would provide an extra €40 million to repair regional and local roads and footpaths.

He said the Government was boosting public transport by providing new vehicles under Dublin’s Bus Connects programme and extending the trams on the capital’s Luas light rail service.

The DAA will pay for this and other extensions of its facilities from its own resources. The Government gives cash to regional airports to fund infrastructure and security.

At the same time, State-owned ports including Dublin, Cork and Shannon Foynes were spending €587 million on their facilities.

The Department of Transport, Tourism and Sport’s total budget for next year will be €2.36 billion, made up of €755 million in current spending and €1.61 billion for investing in infrastructure.

In land transport, taxpayers are funding projects such as Bus Connects, the planned metro linking Dublin city centre with its airport, and the expansion of services such as the Luas.

The Government is also spending money on national and local roads, including the Naas bypass in Co Kildare and the New Ross to Gorey scheme in Co Wexford, which will be finished next year. It has also begun planning the Cork-Limerick road.

Shane McSweeney, partner and head of government and infrastructure at accountants EY, welcomed the pledge to spend an extra €1.4 billion on infrastructure but warned that work on key projects should start immediately.

“We need to ensure that additional infrastructure projects are prioritised in a manner that maximises the long-term sustainable economic benefits available,” Mr McSweeney argued.

He added that the Government should not turn the infrastructure spending tap off in an economic downturn as previous administrations have done.

Construction Industry Federation head of economic policy, Jeanette Mair, argued that the timely implementation of the National Planning Framework and National Development Plan was essential in key areas such as housing, transport, health and education.

“It’s essential now that both the State’s apparatus and the construction industry have the capacity required to deliver on these ambitious strategies,” she said.