VRT relief on hybrid vehicles extended to end of 2019 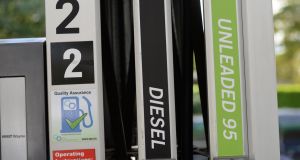 A new 1 per cent surcharge on the Vehicle Registration Tax (VRT) charged on all new diesel cars has been introduced in the Budget. It was the only move against diesel, contrary to expectations that excise duty may be increased on the fuel

A new 1 per cent surcharge on the Vehicle Registration Tax (VRT) charged on all new diesel cars - or diesel models imported into the Republic - has been introduced in the Budget. The new diesel levy is estimated to add on average €400 to the cost of a new diesel when it comes into effect from January 1st.

It was the only move against diesel, contrary to expectations that excise duty may be increased on the fuel. The 1 per cent rate will be added to the current VRT charges on new cars, which range from 14 per cent to 36 per cent depending on the car’s official emissions levels.

Diesel cars represent 54.4 per cent of the new car market so far this year, down from 65.3 per cent last year. However, diesel still represents 76 per cent of used car imports.

There has been a significant kickback from authorities against diesel since news broke about the Volkswagen scandal in the US, where the company fitted cheat devices to hundreds of thousands of its diesel vehicles to mislead official emissions tests.

The announcement was strongly criticised by the Irish motor trade. Alan Nolan, director general of the Society of the Irish Motor Industry (SIMI) said: “This was a poorly considered measure that appears to have been included to give the perception of an environmental focus in the Budget.”

He said concerns about diesel centre on air quality in cities but city-based car buyers have already moved away from buying new diesel cars. “The bigger impact here will be on rural and business buyers for whom diesel is still the better environmental choice. The real problem is that this type of provision is likely to have a different impact to what is intended, for instance it may cause some purchasers to postpone their car change, reducing the potential to add cleaner new cars into the fleet.”

He said the motor trade has been strongly supportive of the transition away from internal combustion engines and in reducing the diesel market share.

In his Budget speech, the Minister for Finance also extended the current €1,500 relief on regular hybrids and €2,500 on plug-in electric hybrids.

He said: “I am extending the VRT relief for hybrid vehicles until end 2019. I will then review these reliefs in the context of overall changes to VRT brought about by the new emissions measurement system, the WLTP.”

The new WLTP measures aims offer more realistic real-life data on emissions. It will form the basis for all emissions figures for new cars produced from September 2019.

According to Alan Nolan: “The real disappointment for businesses and jobs in our sector is that we were already facing an increase in VRT in January, only on the price of a new car, in the region of €450, due to the new EU emissions test (WLTP).This additional 1 per cent surcharge, announced in the Budget, is likely to add a further €400 on average to a new diesel car from January.

With the low value of sterling driving up the number of older cars being imported into the Republic, he said decision on VRT “flies in the face of the stated support and consideration for those impacted by Brexit”. “Our sector has been the worst impacted to date by Brexit and the 14 per cent fall in new car sales since Brexit is likely to accelerate further next year,” he said.

Conor Faughnan of the AA took a more neutral view of the Budget. In terms of the decision not to increase excise duty on diesel he said “we avoided the stick but there were no carrots”.

“Increased incentives to move to ultra low-emission and electric cars could have been considered, as could measures to promote alternatives to car use,” said Faughnan.