Budget 2019: Minister says measure will raise €466m for spending and is ‘responsible’ 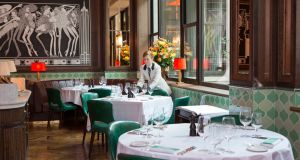 Paschal Donohoe, the Minister for Finance, declared that the reduced VAT rate of 9 per cent to help the tourism and hospitality industry has “done its job”.

Groups representing the tourism and hospitality industries have sharply criticised the Government for raising the sectors’ VAT rate from 9 per cent to 13.5 per cent in Budget 2019.

Paschal Donohoe, the Minister for Finance, declared that the 9 per cent rate, introduced to stimulate the then-flagging sector in 2011, had “done its job”. He said the tax increase, to be introduced in January, will raise €466 million next year, and €560 million annually thereafter.

The minister justified the move by highlighting the currently-booming performance of the tourism sector and by linking the tax hike to planned spending increases in housing and education. The measure will raise two-thirds of the State’s planned €700 million in extra current spending for next year.

Mr Donohoe said the move represented “responsible” budgetary policy aimed at “balancing of our books at a moment of national risk”.

However, the Irish Tourist Industry Confederation (Itic) called the move a “damaging blow to the industry” ahead of Brexit.

Eoghan O’Mara Walsh, Itic’s chief executive, said it will immediately seek a meeting with Shane Ross, the Minister for Transport and Tourism, to ask for a deferral of the move until January 2020.

The Restaurants Association of Ireland described Budget 2019 as “thoughtless” for the wider tourism and hospitality sector. “The Government has turned its back on the tourism sector,” claimed the RAI.

Immediately after the minister made his announcement, stockbroker Davy reduced its forecasts for the listed Dalata Group, Ireland’s largest hotel operator.

Businesswoman Lorraine Sweeney, who owns three hotels in Wicklow – the Summerhill House in Enniskerry, and the Esplanade Hotel and the Wilton in Bray – as well several cafés, said the move could be “disastrous” for her business.

“This will choke us at a time when we need to play catch up by investing in our properties. This will add €350,000 to our VAT bill,” she said.

Aiden Murphy, a Crowe partner and adviser to the hotel industry, said the rise would be “particularly harmful” to the regional hotel sector, which, he said, has less scope to pass on the increase than Dublin hotels.

“This will curtail some needed expansion in the regional hotel sector for the next two or three years,” he said.

The consultancy EY-DKM Advisory Services said it “understood the rationale” for the move, given that tourism is now at record levels.

“Whilst acknowledging that tourism may not have fully recovered in some locations, there are better ways of spending the money to support businesses and boost tourism in those locations,” said Annette Hughes, an economist and director at the firm.

The minister attempted to soften the blow for tourism by announcing an additional €35 million of “more targeted support” for the sector, such as an extra €4.5 million for marketing regional destinations like the Wild Atlantic Way, as well as €10 million to spend on more greenways.

The corporate catering sector, meanwhile, has also been caught up in the VAT rise. Staff canteens had been able to avail of the reduced rate that was intended for tourism, as they had provided catering services. These services will now attract the 13.5 per cent rate, as does the rate for hairdressing.

The 9 per cent VAT rate was retained in Budget 2019 for sporting facilities and for also printed newspapers. The VAT rate for e-books and digital versions of newspapers was also reduced from 23 per cent to 9 per cent.

The reduction in the rate of VAT for online publications was facilitated by a decision of the EU council of ministers last week to amend to VAT directive to allow states align rates with those applying to physical printed publications.

A Fine Gael minister attacked the abolition of the special 9 per cent VAT rate at a Cabinet meeting on Tuesday morning.

Minister for Rural Affairs Michael Ring is understood to have raised serious concern about the effect it would have on businesses in rural Ireland.

Sources said Mr Ring also said it could discourage some people, a large portion of whom are lower paid, from working in the sector.