Budget process not fit for purpose 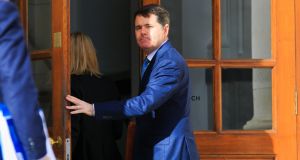 Minister for Finance Paschal Donohoe arriving at the Department of the Taoiseach prior to announcing Budget 2019. A slightly simplistic view of the budget is that it is the result of a shouting match between vested interests. Photograph: Gareth Chaney/Collins

What is the budget for? It’s a simple question with no clear answer. We might be forgiven for thinking that the answer is obvious but you only have to think about it for a minute to realise that there are multiple, often competing, responses.

Today’s budget is about increased Government spending when we should be running large budget surpluses. The next budget will be the same or different, depending on what happens over the next 12 months: little strategic thinking there. That’s politics versus economics.

The annual budgeting process is not fit for purpose. It is, first and foremost, a nakedly political exercise. Economists can witter on about the need to balance spending and taxes over the cycle but nobody pays much attention. To be fair, this is true of most developed economies: no matter how much a finance minister might want to think about the long-term needs of the economy, the demands of politics never give him or her the latitude to exercise this kind of discretion.

This week’s award of the Nobel prize for economics to William Nordhaus was to the man who coined the idea of “the political business cycle”. Nordhaus noticed how budgets tended in the past to juice the economy ahead of elections only for the brakes to be slammed on soon after.

Rarely did the needs of the economy or any thoughts about the right way to set tax rates or spending levels enter the discussion. We have plenty of our own experience of that kind of policymaking. Thankfully, budget rules set by Brussels plus the discipline of the bond markets mean that such egregiously inappropriate fiscal policy is now mostly a thing of the past. It may even be that modern finance ministers have absorbed some of the lessons of previous mistakes.

Nevertheless, we still see echoes of the bad old ways. Additionally, we have evolved a way of doing things that contains some very modern features. A slightly simplistic view of the budget is that it is the result of a shouting match between vested interests. Full rein can never be given to those interests mostly because of the tram lines set by European budget rules. Room for manoeuvre is limited.

The modern budget is mostly about managing the annual overrun of health spending and then allocating the crumbs that are left between the various groups who shout the loudest.

Economists always talk about the need for fiscal reform. Indeed, one of our great departments of state, charged with looking after the spending side of the budget, has the word “reform” in its name. Decades of talking about reform hasn’t resulted in very much of it. Budgets are incremental things these days: a tweak here, a bung there.

Reform starts with a strategic context: what politically and economically does the State thinks it should spend, as a proportion of the economy, and what is the most efficient – if not painless – way of raising the commensurate revenues? Against that long run background the current cyclical position of the economy should be taken into account.

The temptations to assume robust growth continues more or less forever, and recent tax buoyancy – windfall or not – is permanent, are almost always too strong to resist. So some credit must go to the Minister for Finance for acknowledging the need for a rainy day fund and the temporary nature of at least some of the recent corporate tax receipts.

Too many resources are devoted to forecasting the economy over the next few years: they would be better diverted to thinking about those strategic questions. We should by contrast simply assume the economy grows a bit over the next while and move on.

Fundamental reform is clearly politically impossible. Economists and finance experts endlessly point out the unnecessary complexity of the tax and welfare system. It is never made simpler.

One lesson of the financial crisis is that we will never introduce fundamental reforms: if we couldn’t do it in the wake of that, then we will never do it.

Consider the USC: it is the most hated tax so the only priority is to cut it whenever possible and to take as many people out of its reach as we can. It is, in fact, a very efficient and progressive tax. It makes abundant sense to economists and little sense to politicians. Economics and politics again.

Health and housing are the obvious priorities reflected in today’s budget. Again, that’s politically understandable. But who can honestly say they understand why the health overspend is always a bit more than last year, no matter what amount of cash is allocated in advance?

Investment in old-fashioned clipboards and stopwatches might pay dividends – but nobody is willing to ask questions about efficiency or value for money in the health service.

Nordhaus pointed out the obvious: as citizens we all place some degree of value on our own and our children’s future. But we elect politicians who necessarily place little weight – value – on anything past the next election.

One solution that we will never try would be to put budgetary policy on the same footing as monetary policy: delegate to independent technocrats with a clear long-term mandate. That mandate can encompass all of the politics but only in a long-term setting.

1 How safe is it to go back to the office?
2 Elderly parents living in property you own will save you on capital gains tax
3 More than 40% of help-to-buy recipients already had deposit
4 Construction workers among first PTSB borrowers off payment breaks
5 Most workers now expect choice to work from home part-time
6 Owner of Dundrum Town Centre to sell prized assets
7 Cinema tensions laid bare by deep crack in theatrical release windows
8 56 financial firms entered or expanded Irish operations in 2020
9 HealthBeacon becomes official NHS supplier and seeks extra funds
10 Virgin Media Television expects to lose a quarter of ad revenue in 2020
Real news has value SUBSCRIBE