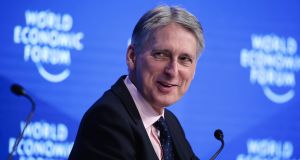 UK chancellor Philip Hammond: “If we are driven out of that market, and denied access to our most important market, we will reinvent ourselves and find a new way of being competitive”

Britain intends to complete its exit negotiations with the EU within two years but also agree a number of transitional arrangements with the bloc, British chancellor of the exchequer Philip Hammond has said.

Speaking on the final day of the World Economic Forum in Davos, Mr Hammond said that while the two-year time frame was “challenging” it was also “necessary”. He said that several transitional arrangements would be necessary to manage Britain’s future relationship with Europe.

Mr Hammond also warned that Britain could leave the “economic mainstream” if it does not secure a free trade agreement with the EU. He said Britain’s strong preference was “that we remain within the European economic mainstream,” with access to each others’ markets. This would also involve Britain “continuing to operate to European norms and regulatory standards”.

However, he warned: “If we are driven out of that market, and denied access to our most important market, we will reinvent ourselves and find a new way of being competitive.”

Mr Hammond noted that the performance of the British economy since the June referendum had confounded some experts.

He also said the reasons behind the British vote to leave the EU were different than the impulse behind the Trump victory in the United States.

In a series of appearances on the final day of the World Economic Forum, Mr Hammond echoed the central theme of prime minister Theresa May’s speech in Davos on Thursday by stressing that Britain was not closing its doors by choosing to the leave the EU. “We cannot accept the principle of free movement any longer…T hat is not the same as saying we want to close the doors.”

On Thursday, Dutch prime minister Mark Rutte – traditionally perceived as one of Britain’s strongest EU allies – was highly critical of the British government’s confirmation this week that it intends to leave the single market.

Britain is “making a choice to control migration and they are paying a huge price”, he said. “Their economic growth will be impacted negatively by the decision to leave the world’s biggest market. They are willing to pay that price.”

A number of banks have also voiced concern about Britain’s confirmation that it intends to leave the single market. The chief executive of JP Morgan Chase, Jamie Dimon, said this week that “it looks like there will be more job movement than we hoped for”, while HSBC also announced plans to move jobs from London to Paris.

During a panel discussion on Friday morning Mr Hammond also said that Britain had offered Europe a deal to secure the rights of EU citizens living in Britain and British citizens living in other EU countries at the last European Council but this had been rebuffed by a number of member states.

Asked if highly-skilled students will be affected by Brexit , he said that the political debate is “not about them – it’s about the effect of low-skilled immigration”.

“There is no system that I can conceive of that would be intended or designed to cut off the flow of highly-skilled students…that would be shooting our kneecaps off and we are not going to do that.”

Mr Hammond also described the change of administration in Washington as a challenge for Britain.

On Thursday evening veteran investor George Soros described Donald Trump as an “imposter”, “con-man” and “would be dictator”.

He also predicted that Mrs May would not last as prime minister due to the Brexit negotiations.