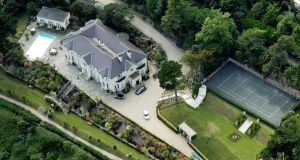 A bank-appointed receiver wants the adult children of solicitor Brian O’Donnell out of their Co Dublin luxury home by February 1st following a Supreme Court decision rejecting their appeal against repossession of the house.

Three of the four children – Blaise, Blake, Bruce and Alexandra O’Donnell – still live at Gorse Hill, Vico Road, Killiney, Dublin, which was acquired in 1997/98 for nearly €1.4 million as the O’Donnell family residence in what the court said was part of a “very complex legal structure” involving the setting up of a discretionary trust.

An adjoining piece of land was later acquired, also under a trust, for €1.5 million with the original house demolished and the site redeveloped as a family residence by the O’Donnell parents. It is now said to be worth between €6 million and €7m.

The Supreme Court said both acquisitions were done to avail of a scheme to avoid stamp duty on the purchase.

By 2010, the O’Donnell parents had defaulted on various liabilities to Bank of Ireland (BoI) which in December 2011 obtained judgment for €71.5 million against them.

BoI-appointed receiver Tom Kavanagh sought possession of the house, arguing it formed part of the securities and guarantees given in 2006 in relation to the O’Donnell parents’ debts.

All four adult children appealed a July 2013 High Court decision by Mr Justice Brian McGovern upholding the bank’s claim it was entitled to possession of Gorse Hill on foot of those securities.

Gorse Hill is owned by Vico Ltd, an Isle of Man company, and the shareholding of Vico is owned by the discretionary trust set up by the O’Donnell parents in favour of their children.

The legal dispute centred on whether Gorse Hill was an asset of the trust legally and beneficially owned by the children and whether the bank was aware of an alleged breach of that trust arising from the giving of the property in 2006 as security for the loans.

Mr Justice McGovern found the legal and beneficial ownership of the house was vested in Vico Ltd and that the trustee of the discretionary trust held shares in the company (Vico) rather than any interest in Gorse Hill.

Yesterday, a five-judge Supreme Court unanimously upheld that decision as correct and ruled the O’Donnell children’s claim that Vico merely held the property in trust for them as beneficiaries was incorrect.

Cian Ferritter SC, for the bank and Mr Kavanagh, said the receiver would be seeking vacant possession of the house on February 1st and he wanted to flag that so as to give the O’Donnells time to get their affairs in order. That issue will be dealt with along with costs when the case comes back before the court next month.

Ms Justice Mary Laffoy, on behalf of the Supreme Court, said there was no issue, during the appeal, as to the capacity of Vico to grant securities over Gorse Hill.