Be on your guard when Mario Draghi drops hints 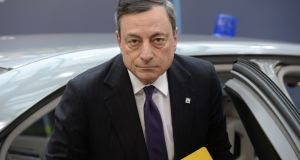 Don’t be fooled by Mr Draghi when he signals that interest rates have been cut as low as they can go, as he did at the ECB’s March policy meeting. Photograph: Thierry Charlier/AFP

It is a risky game, taking central bankers at their word. Investors should be wary of what central bankers appear to be saying or signalling. Like some politicians, economists and even journalists, they often change their mind.

Mario Draghi, the president of the European Central Bank, is a case in point. Don’t be fooled by Mr Draghi when he signals that interest rates have been cut as low as they can go, as he did at the ECB’s March policy meeting.

After reducing the deposit rate to minus 0.4 per cent, he could not have been clearer when he said: “We don’t anticipate that it will be necessary to reduce rates further.”

Although he kept the option of further cuts open, he outlined his unease about negative rates and their impact on the region’s commercial banks.

Consequently, some investors and commentators think interest rates have hit their floor in the euro zone.

But Mr Draghi has made similar assertions after cutting rates before.

In June 2014, he reduced rates to minus 0.1 per cent and said: “For all practical purposes we have reached the lower bound.”

In September 2014, he dropped rates to minus 0.2 per cent and said: “We are at the lower bound where technical adjustments are not going to be possible any longer.”

There is an obvious pattern. Mr Draghi signals the floor has been reached, only to change his mind later. The likely reason for his “no lower” signals is that he does not want to scare markets.

Bank stocks, bonds and credit default swaps, which are a kind of insurance against default, have all been rocked by worries about negative rates and their impact on the banking business.

There are also concerns for banks in euro zone countries such as Austria, Portugal and Spain, where mortgage rates could go negative in the event of the ECB cutting further, as these mortgages are linked to euro zone money market rates. In other words, banks in Austria, Portugal and Spain may end up paying customers for lending to them, which would be bad news for their balance sheets.

The Bank for International Settlements warned in a report this month that there was great uncertainty over the potential for deeper cuts into negative territory.

However, “Life Below Zero”, a research paper by HSBC, the bank, suggests that the ECB could cut rates much further. It says that the Swiss National Bank currently operates the most negative rate of all the world’s leading central banks (minus 0.75 per cent).

If the costs incurred by Swiss banks were applied to the euro zone banking system, then the ECB’s deposit rate would be much more negative, at minus 1.8 per cent. The ECB could also tier rates. At the moment, the ECB charges about 90 per cent of its bank reserves at negative rates.

In contrast, the Bank of Japan only charges about 4 per cent of its bank reserves at negative rates, while the Swiss central bank charges about 40 per cent at these rates.

As well as tiering rates, Mr Draghi could extend his new targeted longer-term refinancing operation, or TLTRO, which enables banks to borrow from the central bank, at negative rates. This cushions the banks against negative rates by allowing them to take advantage of them too.

Mr Draghi could ramp up the quantitative easing programme further as a remedy against negative rates. Equity investors consider more QE to be a big positive for stocks, because they think it will encourage growth, higher inflation and higher asset prices.

HSBC also points out that the debt overhang is one of the main reasons for weak growth and low inflation. Negative yields would reduce this debt overhang and help lift inflation and boost the recovery.

HSBC says: “We believe investors may have underestimated the potential for more deeply negative rates. Negative rates may be the least bad choice in terms of policy options.”

In reality, Mr Draghi and the ECB will probably cut rates lower if inflation and the economy does not pick up. Investors should therefore be on their guard when central bankers drop hints about policy. Their job is to stabilise and reassure markets, which sometimes means being economical with the truth.

1 Nearly 30,000 could lose pandemic payment if they do not confirm eligibility
2 ‘No demand... because there are no people’ at well-known Dublin pub
3 Stripe lures Dhivya Suryadevara from General Motors to be CFO
4 AIB concedes Covid mortgage policy was ‘regrettable’
5 Revised help-to-buy scheme opens for applications
6 Digital Hub warns of need for emergency funding from State
7 Tobacco giant’s menthol-ban substitutes take 5% share of Irish market
8 How to . . . move (almost) everything to your new phone
9 Ten of the most mysterious aircraft disappearances
10 Divorce: What will it cost and can you afford it?
Real news has value SUBSCRIBE