As the world’s financial system swooned, the Irish taoiseach crooned

As panic rippled across the Atlantic in September 2008, Irish politicians and officials scrambled to contain the domestic crisis 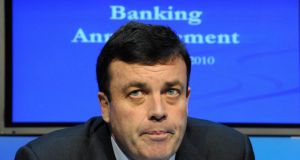 Minister for finance Brian Lenihan: took charge of the State coffers just as “the building boom was coming to a shuddering end”.

It is like a scene from another world. In New York, the Lehman bankruptcy brings the capitalist system close to collapse. Giant banks and insurers teeter. World markets swoon . . . and swoon again and again. In Dublin, secret efforts are in train to prevent an Irish banking collapse. After dinner in a Galway hotel, the taoiseach sings The Mountains of Mourne to Fianna Fáil’s annual think-in.

Brian Cowen was steeling his troops for a tough budget to come. The merriment that night in the west would be described the next day as “the battle of Ballybrit bar”. Yet there was no reason for cheer. A crippling run on Anglo Irish Bank was under way in Dublin, threatening the entire sector. Within days, Cowen’s unlucky government would issue a blanket guarantee to all Irish banks for fear that they would simply collapse. It was a promise the State could not uphold.

Lehman’s demise came abruptly and was without remorse. By the tumultuous autumn of 2008, the market had lost all confidence in the storied bank. This was one year into the credit crunch. Banks were not lending to each other because of losses in the subprime mortgage market in the US. George W Bush’s government had already helped rescue Bear Stearns bank and seized control of mortgage finance companies Fannie Mae and Freddie Mac. As Lehman careered towards the abyss, Washington said it would not step forward with another bailout.

Rescue attempts
More than 100 Wall Street chieftains and government officials spent the weekend of September 13th and 14th in the Federal Reserve Bank of New York seeking a solution. There was no rescue. Words attributed to New York mayor Mike Bloomberg set the scene: “The world is about to end tomorrow”.

Lehman duly filed the next day – Monday, September 15th – for bankruptcy, the largest in history.

At this time, Ireland’s banks had already lost more than half their value. Having trebled in value in the boom times, they were laid low by the credit crunch and steadily increasing doubt that they could weather the onset of recession and a self-perpetuating property market decline.

After the run on British bank Northern Rock in September 2007, the government had taken some steps to guard against chaos. Filings to the Public Accounts Committee point to work in the Department of Finance on “financial stability issues” in January 2008, to the preparation of contigency legislation to take over a stricken bank or guarantee banking liabilities, to repeated ministerial briefings.

Bad timing
Cowen became taoiseach in May 2008 after Bertie Ahern’s exit. His successor in the Department of Finance was Brian Lenihan, who would lament his misfortune to have taken charge of the State coffers just as “the building boom was coming to a shuddering end”.

In private, later on, he would draw a war-time analogy with the desperate struggle to keep Ireland’s main banks afloat: the task was akin to steering six heavily-laden cargo ships through the North Atlantic under constant threat of U-boat attack.

Lenihan spent the first part of the weekend of Lehman’s collapse at an EU meeting in Nice, France. With turmoil already ripping through markets, these talks were dominated by the drama on Wall Street. Pressure was mounting too on Ireland’s banks, with Anglo increasingly singled out as depositors withdrew their cash.

Lenihan flew back on the Government jet, landing in Baldonnell on the afternoon of Saturday 13th. Some of the minister’s party went directly to the Central Bank building where officials from the Department of Finance, the Financial Regulator and the National Treasury Management Agency were engaged in a “role-playing” meeting on the possible collapse of an Irish bank.

At issue primarily, according to someone present, was growing concern that Irish Nationwide Building Society might be the first to crash. The society, led by the enigmatic Michael Fingleton, had been under acute strain. Records given to the Public Accounts Committee show the Central Bank meeting discussed a “red button” phase in relation to government intervention a stricken institution; the recall of the Dáil and Seanad; the need to plan against contagion; the requirement to dig-in against “backlash” and to “keep messages positive”.

The question of system-wide intervention is not mentioned. Indeed, a Department of Finance presentation from April 2008 says that open-ended State guarantees exposing the exchequer to “significant fiscal risk are not regarded as part of the toolkit for successful crisis management and resolution”.

The talks in the Central Bank continued on Sunday, by which stage the fate of Lehman was becoming clear. Lenihan travelled that day to Galway for the Fianna Fáil meeting, an event dominated by talk of the necessity for Government deputies to defend difficult budget choices.

The following night, singer Eleanor Shanley entertained the TDs. Cowen was called upon by the faithful to sing and took up the invitation.

Ripple effect
Global markets were in uproar, leading Paulson to propose a $700 billion rescue plan to buy up “toxic” debts from mortgage lenders. British bank Lloyds rescued Halifax Bank of Scotland, the deal predating the nationalisation of Lloyds only by weeks. Russia suspended trading on its stock market for two days.

In coordinated action, the US Fed, the European Central Bank, the Bank of England and the Bank of Japan resolved to douse the financial system with $184 billion in cash. Yet still the turmoil grew.

Within days, Goldman Sachs and Morgan Stanley took action to protect themselves by abandoning their status as investment banks to gain access to emergency funds. Goldman accepted investment from billionaire Warren Buffett while Mitsubishi UFJ took a stake in Morgan Stanley.

The vulnerability of the Irish banks was amplified. With its options narrowing, Anglo made a succession of fraught but futile entreaties to INBS, Irish Life & Permanent, Bank of Ireland and Allied Irish Banks to shore up its position.

In government, meanwhile, even action to reinforce confidence in the sytem betrayed weakness. The Saturday after Lehman went under, Lenihan said the government was increasing the bank deposit guarantee limit to €100,000 from €20,000. It was to no avail.

Within three days, officials at a “brainstorming session” in the Department of Finance were examining a slew of radical options, including a merger of AIB and Bank of Ireland.

Just one more week of panic passed before the dead-of-night move to guarantee all the banks. It was a decision taken in fear. Anglo had all but run out of money and the others were vulnerable. By ring-fencing the entire system, the government bet big that it could stand behind all the banks without inflicting huge losses on the taxpayer. Wrong.

Why make election promises you know you can't afford to keep?