Argentina unveils plan to get around US court ruling on debt 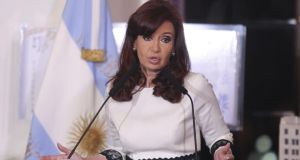 Argentina’s government has unveiled a plan to get around a US court ruling and restart servicing debt on which it defaulted last month as the result of a dispute with creditors in New York.

On Tuesday night President Cristina Kirchner outlined a plan that will allow holders of bonds issued overseas as part of the debt restructuring that followed the country’s 2001 default to swap their paper for new dollar-denominated bonds issued under Argentine law.

The move would allow her administration restart interest payments on bonds issued in the US that have been blocked since last month by the ruling of a New York judge. The ruling prevents any US financial institution from servicing the bonds unless Argentina also pays up in full creditors who refused the restructuring offer.

The announcement is the latest signal that Mrs Kirchner is determined, despite the latest default, not to negotiate with the holdouts, a group of hedge funds that bought up the country’s debt after the 2001 default at huge discounts and refused to accept the restructuring deal which implied a face-value loss of 65 cents on the dollar.

The new plan, which will require approval from Argentina’s congress, will force holders of the restructured bonds to choose between remaining in legal limbo in the US or switching to Argentine jurisdiction in order to receive their interest payments.

Under the plan, further details of which were given at a press conference yesterday by finance minister Alex Kicillof, Argentine state bank Banco de la Nación will take over from Bank of New York Mellon responsibility for transmitting payments.

Mrs Kirchner denies the country re-entered default last month, saying it had deposited with Mellon the $539 million required to meet interest payments on its restructured bonds but was prevented from paying out by Judge Thomas Griesa’s ruling .

During her televised announcement, Mrs Kirchner again attacked the judge. Appearing to battle back tears, she admitted she was “nervous” adding: “I feel we are living through an injustice against Argentina.”

Local markets reacted negatively to the government’s proposal, which is seen as having little chance of speeding a resolution with the holdouts or bringing nearer Argentina’s return to global capital markets, closed to the country since the 2001 default.

1 Basic income for all: Has the Covid crisis given us a new economic model?
2 ‘I don’t need to do any of this. . .I don’t actually need to work.’
3 Only way is up for Stripe as valuation skyrockets
4 Anti-alcohol zeal of public health experts peppers reopening debate
5 AIB revives €1bn-plus problem mortgages sale
6 Direct sea routes to Europe offer certainty in choppy Brexit waters
7 Press Up Entertainment: Who is behind it and what do they do?
8 Move to EU or face disruption, City of London is warned
9 Career opportunities? The ones that just may knock
10 John FitzGerald: What kind of banking system do we want?
Real news has value SUBSCRIBE