In the wake of a bond rally, the markets may be downplaying danger of a default 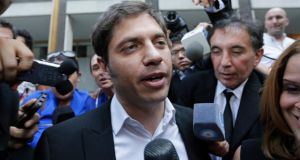 In Rebel Without a Cause, the anti-hero played by James Dean is challenged to a lethal game of chicken in which two cars must race towards a cliff. The loser is the driver who jumps out first. Investors in Argentine bonds must feel as if they are in a re-run of the 1955 film.

“There is no better analogy” for the showdown between Argentina and a group of New York hedge funds seeking repayment of bonds still in default since the country’s 2001 debt crisis, says Marco Schnabl, an Argentine lawyer at Skadden, Arps, Slate, Meagher & Flom. “Who is prepared to get closest to the brink?”

Despite a looming July 30th deadline for Argentina to make interest payments on restructured bonds, which it has been prevented from doing by a New York judge unless it also pays its “holdout” creditors in full, Argentine bond prices have rallied sharply in anticipation of a deal that would avoid the second default in 13 years.

That is because analysts are convinced that common sense will prevail. The economic consequences would be “catastrophic” for Argentina, while the cost of fixing the problem is small compared to the huge benefits from regaining access to capital markets, lower financing costs and attracting foreign investment, he says.

“What [the markets] are not contemplating is that, in a country like Argentina, the officials at the ministry of finance will not be liable for defaulting, but they would be subject to endless criminal actions if the Rufo gets triggered,” said Mr Etchebarne, referring to a clause in the restructured bonds expiring at the end of 2014 which prevents the holdouts from getting a better deal.

In order to avoid activating the Rufo clause, as well as to allow more time for negotiations and avoid default, Argentina has requested a reinstatement of a “stay” of execution on Judge Thomas Griesa’s order that it must pay the holdouts $1.5 billion at the same time as it pays exchange bondholders. The stay was removed last month when the US Supreme Court finally rejected Argentina’s appeal, putting an abrupt end to the decade-long trial.

A hearing on the case is scheduled for tomorrow at a US court in Manhattan. Judge Griesa may also address that day a motion filed by holders of restructured Argentine euro bonds. The motion seeks clarification on the suspension of debt payments on the securities, which are governed by UK laws.

NML Capital, the hedge fund which leads the holdouts, said in a statement on Friday: “Argentina still refuses to meet with us or even attempt to reach a resolution of any aspect of this dispute . . . the Argentine government appears determined to default.”

“The more time Argentina wastes, the harder it will be to get the stay. They keep destroying goodwill,” says Charles Blitzer, a consultant and former International Monetary Fund official, who argues that problems posed by the Rufo can be “easily” dodged.

“So far there haven’t been five minutes of negotiations. It’s inconceivable to me that the plaintiffs will just say, ‘Okay, Argentina refuses to negotiate but we’ll give them the stay anyway.’ Why should they?”

Others argue that it is not in the holdouts’ interest to let Argentina default by denying a stay, which few expect Judge Griesa to reinstate of his own accord. “The threat of a default is the only weapon the holdouts have, and it is a bullet they can shoot only once,” says Mr Schnabl.

“A default would render a settlement highly unlikely if Argentina overcomes its consequences,” says Mr Etchebarne, who argues that holders of restructured debt subject to US law, worth about $10 billion, should ultimately be able to sue for repayment in Buenos Aires, and that Judge Griesa will not be able to block payments outside the US in the long term.

Economists say that the consequences of a default could be severe, causing a further contraction in an economy already in recession, especially if bond prices collapse in the wake of a default, increasing the country’s borrowing costs.

While a deal between Argentina and the holdouts would be “a win-win solution”, a default would represent the opposite, says Mr Blitzer. “It’s the Samson solution: pulling down the temple and everyone else with it, including himself.” – (Copyright The Financial Times Limited 2014