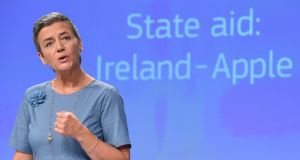 European Commissioner for Competition Margrethe Vestager talks as she gives a press conference to order Apple to pay €13bn in back taxes, in Brussels. Photograph: John Thys/AFP/Getty Images

1 The Government will be obliged to issue a tax bill to Apple. However, the certainty of an appeal means the money is likely to be put into some kind of escrow account – in other words it will not be ours to use – until legal appeals are over. Given also that the European Commission decision questions whether all the €13 billion is actually due to Ireland – saying other European countries or even the US might stake a claim – it is unclear whether Ireland will ever see some, or all, of the cash.

2 The Government points out that under EU budget rules it could not use a one-off windfall – if one does eventually appear – to fund day to day spending or tax cuts. It would have to go to pay down the national debt, which now stands at €200 billion. A decent chunk off the debt would, of course, reduce the debt and the annual interest bill. However, the Government says that it has to act to defend Ireland’s reputation as a place for FDI investment and appeal the decision. 3 The European Commission investigation was specifically into the affairs of Apple. There is no investigation under way into other Irish companies. The one concession to Ireland in the commission’s press statement is a sentence saying “this decision does not call into question Ireland’s general tax system or its corporate tax rate.” It is likely that other US companies both here and in other European countries had similar, though possibly not identical, structures. It remains to be seen if the commission has other targets in the years ahead, though Irish sources do not believe it currently has other Irish companies in its sights.

4 There appears to be no chance of any negotiated settlement here. If the amount demanded by the European Commission was much smaller, some sources feel there might have been attempts to sort out some agreement. Now, however, this will not happen. This will go right through the European courts system.

5 The Government and IDA argue this will have no impact on future foreign direct investment. The European Commission statement that it is not targeting our general tax system will provide some support. However, it remains to be seen what impact this has on overall US investment in Europe and in Ireland, and if US companies will be tempted to pull back from operations here if they feel they are being targeted by officialdom.