Apple’s billions will merely be ‘resting in our account’ 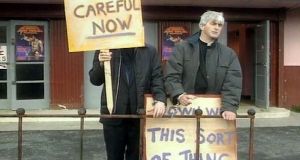 I wouldn’t start planning a second Metro line, a replacement for the M50 or a Dart to Dingle, on the basis of Ireland getting hold of the €13 billion which the European Commission says Apple owes to Ireland in back taxes and penalties.

Minister for Finance Paschal Donohoe has struck a deal with Apple which means the US giant is to start paying the cash into an escrow account shortly, pending the outcome of appeals to the European courts by the company and the government. In the meantime the money will, as Father Ted might have put it, be resting in our account.

The European courts will face a specific question: does Apple owe the money on the basis of illegal state aid offered to it by Ireland?

Apple should pay a reasonable amount of tax, for sure. And over many years it paid tax at ridiculously low levels on profits earned outside the US, employing some highly aggressive tax structures on the way. But the courts will decide the case on the basis of legal “had to”, not “should have” and Apple insists it did nothing illegal. In part, the company can now argue it was deferring tax, given recent US tax changes.

As a layperson I wouldn’t be counting on Ireland getting the cash. As this case involves competition law being applied to a case involving tax, there is little precedent here for the commission’s claim.

Also, the iPhone and all the other products were dreamt up, designed and their development led from Cupertino, California. This is where most of the value was created – and thus, you would think, where most of the tax should be paid. And indeed some of it will be paid to Uncle Sam, with the new US legislation now obliging companies like Apple to pay tax at a rate of 15.5 per cent on offshore cash piles.

Were Apple to have to pay the €13 billion here, it would get some write-off against its US tax bill, though not the full amount. For Ireland, ironically, losing the case would mean getting the cash, plus any penalties due and the investment return for when the money is in escrow.

If you wanted one story to illustrate the twin-track world that is the multinational presence in Irish economy, it is provided by Apple. The company is a real and substantial player, employing some 6,000 people here and making a significant economic contribution. Alongside this has lived an accounting structure which will be central to the European court’s decision on whether it owes back tax.

And no one would argue that the revelation in a recent International Monetary Fund report that Apple’s iPhone accounted for a quarter of the gross domestic product growth rate of the Irish economy in 2017 was an accurate reflection of its contribution. An international reorganisation by Apple is central to this. Apple moved the ownership of a large part of its intellectual property (IP) – the trademarks, patents and copyrights relating to the development of its products and business – to an Irish company.

The movement of IP to Ireland by Apple and others was part of the reason for the “Leprechaun economics” 26 per cent surge in Irish GDP in 2015. The resulting income earned by these assets also seems to be one of the factors which has boosted the corporate tax take.

Our GDP growth figures also got a boost, partly due to contract production arranged around the world by Apple’s Irish operation being counted, as part of international statistical rules, as part of our GDP.The IMF report estimated that Apple’s activities accounted for about 2 per cent of the reported 7.8 per cent growth rate in the economy last year.

There are a few conclusions here. One is that while our national economic statistics will continue to be interpreted internationally by reference to GDP – the agreed norm – we need better measures to guide policy at home. Otherwise the government is managing in a fog. A new indicator – GNI* (“GNI Star”) – has been developed, but it is only published once a year and is not yet adjusted for inflation. These developments are promised.

The initial publication of the GNI* figures – in a “Honey I shrunk the economy” moment – estimated the underlying size of the activity here was one-third less than GDP showed, with implications, for example, about the way we assess the size of our national debt. But for this indicator to be useful we need it to be updated regularly. A title a bit more user-friendly than something pronounced GNI Star might also help.

The other conclusion is that just as Paschal Donohoe will not rely on the Apple back-tax, he also needs to treat the recent surge in corporate tax revenues with extreme caution. We have seen before how quickly tax trends can turn and, with tax rules changing in the US and possibly the EU too, it would be unwise not to build in some leeway. In particular, boosting day-to-day spending on the basis of these revenues would not be a good idea

Whatever the courts decide on the €13 billion, it does not undermine the case that these companies have been central to our economic development, employment and growth. We might prefer if we had more domestically owned multinationals but, outside of a few notable exceptions, we don’t.