Why Ireland faces a fight on the corporate tax front 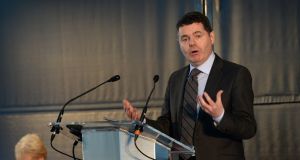 Minister for Finance and Public Expenditure and Reform Paschal Donohoe will have to decide how to play this one. Does he have to give some ground in the short term and hope to fight off the more serious measures ? Or does he just say “no”? Photograph: Dara Mac Donaill

We are now facing a threat to our corporate tax regime, or parts of it at least, that is shaping up as the most serious seen in recent years. The tax attack is starting in earnest and we face a fight on a number of fronts.

The European Commission is finalising proposals for a new tax regime for the digital sector, including a charge levied on some digital sales as a short-term measure. This will be discussed by EU leaders at next week’s EU summit. And the international furore about how little the big companies pay has also pushed the OECD to prepare new proposals on the future of digital taxation, due shortly.

As the state housing the European headquarters of many of the big digital players, we are in the spotlight here. And the European Commission has been sure to keep us there, including Ireland last week in a list of seven EU countries which it says facilitate “aggressive tax planing” by businesses.

Both the European Commission and the OECD are looking at the long-term taxation of digital businesses and how to adapt global and national rules designed to cover the international movement of visible goods to the very different world of digital. There has long been an institutional dog-fight here as to who takes the lead in such matters.

The Commission’s long-term plan will suggest a new concept of digital “presence”, giving taxing rights to countries where the big players are active in the digital marketplace, even when they have no physical presence and where the sales are managed from elsewhere. It is part of a trend which could see more tax paid in the big markets where the major players – Facebook, Google, LinkedIn, Amazon and so on – have most of their customers and less in smaller countries, like Ireland, where many have their European headquarters.

The same kind of danger applies in wider EU moves towards a common, consolidated corporate tax base across Europe, which could cover all big companies and not just digital players. It remains to be seen where these long-term moves lead, but there are clearly big dangers for us.

The immediate issue for Ireland, however, is the Commission proposal for a new digital services tax to apply on some revenues of the big players in this sector as an interim measure to ensure they pay some more while the longer-term tax approach is being sorted out.

The Commission’s view is that Ireland – even though, like all other states, it holds a veto in tax matters – cannot just keeping saying “no”, particularly as some of this revenue is escaping the tax net entirely. The Irish view – privately, at least – is that this is a crude tax “grab” by the bigger member states, led by France, will hurt Ireland.

Indications are that the proposed digital services charge would apply where, for example, major players make money by selling targeted ad space to companies, or where big players act as intermediaries in a digital transaction, for example where Airbnb makes a cut from people renting out homes.

The tax will be controversial, particularly as it is a levy on sales – like VAT – rather than on profits, is confined to digital companies and only hits larger players. It is likely to be attacked by the companies involved and by the Trump administration as being selectively discriminatory.

Ireland will argue that it reduces the attractiveness of investing in Europe for these big players and that its nature as a crude levy runs against the principles of international taxation.

If a big player with European headquarters here pays this levy, then they could count it as an expense against the tax they declare here. So, for example, for every €100 million they pay in the tax, it could – speaking roughly – in many cases cost Ireland €12.5 million. We will get some pay-out from the EU-wide charge, but will certainly be significant net losers.

We will have to see exactly how the tax would work and what rate is will be charged at to judge the overall impact on revenues here, but it would be noticeable.

Of course, these companies already shelter a lot of the profit landing in their European headquarters here from tax, mainly by levying the Irish subsidiary with a royalty charge to account for the intellectual property which went into designing and developing the services they are selling. But they still do pay significant amount of tax in Ireland and this has risen strongly in recent years.

The new digital charge will thus pose some threat to our revenues. And, more fundamentally, when added to recent US tax changes, it chips away at the tax package which Ireland offers to foreign investors.

We will not see companies upping sticks and pulling out, but it does raise questions about the pace of future FDI into Europe, and into Ireland. Tax may no longer be a compelling reason for a US company to invest here.

The immediate question for the Minister, Paschal Donohoe, is how to play this one. Does he have to give some ground in the short term and hope to fight off the more serious measures ? Or does he just say “no”? He won’t have to make the decision just yet, but he will have to soon enough.