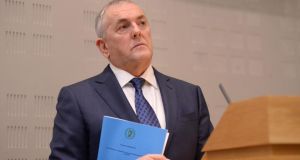 John McGuinness, chairman of the Oireachtas all-party Finance Committee, has written to Apple chief executive Tim Cook to invite him to attend a hearing next month. Photograph: Dara Mac Dónaill

An Oireachtas committee has expressed confidence that Apple’s Tim Cook will accept an invitation to respond to the European Commission tax ruling which has cost his company €13 billion.

John McGuinness, chairman of the Oireachtas all-party Finance Committee has written to the global technology company’s chief executive in California inviting him to attend a hearing next month, along with other senior executives.

The committee will hold a module in late January examining the decision of the European Commission and its implications for Ireland.

The EU Commissioner for Competition, Margrethe Vestager, is also expected to attend the hearings, to explain the background and rationale behind the Commission’s controversial judgement.

In September, Ms Vestager and the Commission ruled that the Irish Government must recoup €13 billion in unpaid taxes from Apple.

In a key passage of the ruling, the Commission stated the tech giant’s tax arrangements in Ireland meant it paid only 0.0045 per cent on worldwide profits outside the US.

Pearse Doherty, Sinn Féin’s spokesman on finance and a member of the committee, said there was a strong likelihood that Mr Cook would be willing to appear before the committee given the gravity and implications of the ruling.

The hearings are likely to coincide with the full publication of the 130-page judgement.

Its final release has been held back several months to allow for redactions of commercially sensitive information.

“We will be particularly keen to ask Mr Cook and other senior Apple managers about their appearance at US congressional hearings where they admitted that Apple’s effective tax rates for its subsidiaries in Ireland was 2 per cent, well below the headline corporate tax rate of 12.5 per cent,” said Mr Doherty.

The Commission ruled that the treatment by the Irish authorities of Apple’s tax affairs amounted to an illegal State aid.

In 1991 and 2007, Revenue issued “opinions” or “letters of comfort” to Apple, setting out its liabilities under Irish tax laws.

Two subsidiaries of Apple were registered in Ireland, but as operating costs and profits for each of the two subsidiaries were attributed to a “head office” that existed nominally abroad, only on paper.

The “mismatch” between the company residency rules in the US and Ireland resulted in the two Apple subsidiaries being ‘stateless’ for tax purposes.

The Government has been party to the appeal which has been lodged against the commission’s judgement.

Fine Gael and Fianna Fáil disagree with the ruling while smaller parties, including Sinn Féin, have called on the State to accept the €13 billion.