Analysis: How low will deposit rates go in Ireland?

It is not just retail deposits that have slumped; corporate rates have fallen too 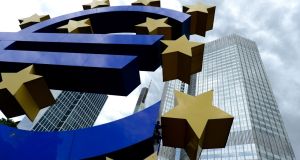 The ECB has kept its main refinancing rate static at 0.05 per cent since September 2014. Irish deposit rates, however, have slumped in the interim. Photograph: Arne Dedert/EPA

Europe’s monetary authority may be keeping its dovish tone on the outlook for inflation in the euro zone, as per yesterday’s pronouncement, but no changes to interest rates doesn’t necessarily mean deposit rates in Ireland won’t slide any further.

Irish deposit rates have, after all, already diverged from main European interest rates. The ECB, for example, has kept its main refinancing rate static at 0.05 per cent since September 2014. Irish deposit rates however, have slumped in the interim.

Figures from the Central Bank show that Irish savers earned an average rate of 1.83 per cent on deposits with terms of up to two years in September 2014. Since then, despite no movement in ECB rates, the return had slumped to 0.98 per cent by November 2015.

Contrast this with today when the best rate on a one-year deposit in Ireland now is 1.15 per cent with Nationwide UK, or 1.2 per cent a year over two years with KBC Bank, according to the Competition and Consumer Protection Commission.

Despite ECB rates remaining steady, the only trend for Irish deposit rates seems to be downwards. Retail deposit rates are already inching towards zero. Rabodirect for example, is now paying no interest (0.00 per cent AER) on one-year deposits, while it will pay just 0.05 per cent on two-year deposits. It is also cutting its rate on its 30-day notice account, from 1.25 per cent to 0.85 per cent, as of February 11th.

As we learned earlier this week, banks have the ability to pay higher rates than these, as evidenced by AIB’s offering of a return of 1.4 per cent on 12-month fixed deposits to German savers. They are just choosing not to.

It is not just retail deposits that have slumped, however; corporate rates have plummeted, too, and some banks on the Irish market are now even offering negative interest rates to corporate customers.

Negative rates are a strange new dynamic, one in which a bank doesn’t pay you a return to keep its money for you, but rather charges you for doing so. They first came to Europe in 2012 when Denmark’s Central Bank became the first central bank in the world to move its main policy rate into negative territory. Some Danish banks have now passed this on to customers.

Danmarks Nationalbank, for example, currently offers a rate of -0.65 per cent on corporate deposits. Other euro zone neighbours with negative rates are Switzerland and Sweden.

Now, even euro zone banks are offering customers negative rates. This has arisen because while the European Central Bank’s main refinancing rate is still in positive territory, at 0.05 per cent, it has dropped its deposit rate back to -0.3 per cent. This means that it charges a nominal negative rate in its direct dealings with other banks, so banks may be itching to pass this on.

Last year Euribor (the rate at which banks lend to each other) fell into negative territory, pushing corporate rates into the red. Here in Ireland, corporate customers of Ulster Bank and Danske Bank for example, may now be paying the banks to hold their deposits, as the banks’ short-term interest rates edge downwards.

However, retail customers in Denmark have yet to be hit with negative rates, and such a move is seen as a bridge too far for the banks.