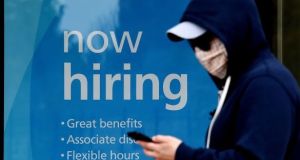 The unemployment rate fell to 6.7 per cent from 6.9 per cent in October

The US economy added the fewest workers in six months in November, hindered by a resurgence in new Covid-19 cases that, together with a lack of more government relief money, threatens to reverse the recovery from the pandemic recession.

Nonfarm payrolls increased by 245,000 jobs last month after rising by 610,000 in October, the Labor Department said on Friday. That was the smallest gain since the jobs recovery started in May. The fifth straight monthly slowdown in job gains left employment well below its February peak.

The closely watched employment report only covered the first two weeks of November, when the current wave of coronavirus infections started. Infections, hospitalisations and death rates have sky-rocketed, leading some economists to anticipate a drop in employment in December or January as more jurisdictions impose restrictions on businesses and consumers shun crowded places like restaurants.

Economists polled by Reuters had forecast payrolls increasing by 469,000 jobs in November. Hiring peaked 4.781 million in June. Reports on consumer spending, manufacturing and services industries have suggested a slowdown in the recovery from the worst recession since the Great Depression.

The United States is in the midst of a fresh wave of Covid-19 infections. Nearly 200,000 new cases were reported on Wednesday and hospitalizations approached a record 100,000 patients, according to a Reuters tally of official data.

A bipartisan, $908 billion coronavirus aid plan gained momentum in Congress on Thursday as conservative lawmakers expressed their support and Senate and House of Representatives leaders huddled.

More than $3 trillion in government Covid-19 relief helped millions of unemployed Americans cover daily expenses and companies keep workers on payrolls, leading to record economic growth in the third quarter. The uncontrolled pandemic and lack of additional fiscal stimulus could result in the economy contracting in the first quarter of 2021.

The unemployment rate fell to 6.7 per cent from 6.9 per cent in October. It, however, has been biased down by people misclassifying themselves as being “employed but absent from work,” keeping the focus on long-term unemployment and people working part-time for economic reasons.

Economists are also watching the share of women in the labour force. Industries that tend to employ women have been hard hit by the recession. Many women have also quit jobs to look after children as schools have moved to online learning.