Dublin looks on as Boris Johnson stands at the cliff edge

Business Week: also in the news was housing; the budget; INM; and power of social media 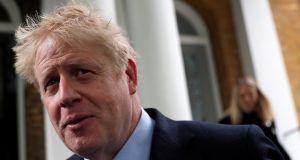 Boris Johnson was adamant there is only a very small possibility of a no-deal Brexit. He also pledged to bypass parliament to bring about a ‘do-or-die Brexit’ if necessary. And all Dublin can do is look on. Photograph: Hannah Mckay/Reuters

Boris Johnson this week evoked an image of himself standing on the cliff edge – the UK shackled to his ankle – shouting that he is prepared to jump while at the same time insisting it won’t come to that.

On the one hand, the frontrunner to be the next British prime minister was adamant there is only a “very, very, very small possibility” – odds of a “million-to-one against”, he said – that the UK will crash out of the EU without a deal.

On the other, Johnson pledged to bypass parliament to bring about a “do-or-die Brexit” should it come to it on October 31st, and told prospective cabinet members to either line up behind him, ready to make the leap, or forget about joining his government.

Meanwhile, all Dublin can do is look on. The Government this week accepted for the first time that a no-deal Brexit could wipe out economic growth altogether next year. It expects 55,000 jobs to be lost in the first two years, and up to 85,000 in the longer term.

To complicate matters, the budget is due to be unveiled just weeks before the Brexit deadline. Minister for Finance Paschal Donohoe said he will prepare two budgets – one to cover an orderly Brexit, and another to cover a no-deal event.

Donohoe said that – for now – the budget day package would be €2.8 billion. However, €1.9 billion of this has already been allocated for capital projects, public sector pay rises and demographic changes.

It was, however, flagged that Taoiseach Leo Varadkar’s proposal to cut income tax by changing the point at which workers become liable for the highest rate will be postponed if there is a no-deal Brexit later this year.

Significant social welfare increases would also be unlikely if there was a no-deal Brexit, Government figures said privately.

Meanwhile, preparations for no-deal continue. Documents released under the Freedom of Information Act showed the State paid €1.6 million for a site near Rosslare Port where inspectors will carry out checks on UK imports in the event there is no-deal.

On a more positive note, a study from Bord Bia found that almost all Irish food and drink companies now claim to be “Brexit-ready”. However, as many as 68 per cent of them are still uncertain what impact there will be from it. Make of that what you will.

Dublin (29) remains the most popular choice for financial services companies to relocate post-Brexit, although Luxembourg (23) and Frankfurt (22) are close behind, according to an EY tracker.

Separately, new figures this week showed the percentage of “prime-age” workers – those aged 25-54 – employed is now higher than at any other time at almost 80 per cent.

Hundreds of thousands of homes are rotting, damp, or in need of urgent refitting: at the same time, half of all counties in the State are unaffordable for first-time buyers. Those are the take-home messages from the property industry this week.

A separate report, this one on housing affordability from the EY-DKM Economic Advisory group, stated that nearly half of all counties in the State are unaffordable for first-time buyers on average incomes.

While Limerick and Waterford are the two most affordable cities to buy a home for first-time buyers, Wicklow and Kildare top the charts as the most unaffordable counties. Somewhat surprisingly, Dublin is only the fourth least affordable county in the State.

Elsewhere, last year’s soaring property prices contributed to a windfall of €466 million for the exchequer on the back of inheritance tax. More than half of all the tax collected was paid by grandchildren, nieces and nephews who inherited more than their tax free threshold of €32,500.

More residential properties were listed for sale in May than in any month since early 2008 as house price inflation eased to its lowest rate since late 2013, according to Daft.ie’s latest data.

It nonetheless showed housing prices were 3.7 per cent higher in the second quarter than for the same period a year earlier. The average price nationwide in the April to June period was €263,000, up 0.9 per cent compared with the first quarter.

Another report, this one from estate agents DNG, indicated that 44 per cent of first-time buyers are availing of the Government’s Help-to-Buy incentive, which allows people to claim back income tax paid over the past five years up to a maximum of €20,000 or 5 per cent of the price of the property. And, in Dublin at least, they’re the ones driving any price increases.

The “end of an era” was declared at embattled media giant Independent News & Media this week as shareholders gave the thumbs up to the €145.6 million takeover of the business by Belgian group, Mediahuis.

About 85 per cent of INM individual shareholders holding 94 per cent of its shares formally approved the scheme of arrangement that was put forward for the deal. The vote still needs Government and High Court sanction, but it’s nearly over the line now.

At the meeting, Kieran Mulvey, the INM board nominee of Denis O’Brien, who was the biggest shareholder until Mediahuis began stakebuilding in May, strongly criticised “largely unregulated” web giants such as Facebook for “hoovering up” advertising.

In other INM news, the State’s corporate watchdog, the Office of the Director of Corporate Enforcement said the fees for the two High Court inspectors appointed to investigate the company have reached €550,000.

Elsewhere, the Broadcasting Authority of Ireland has submitted a proposal to Government in which it seeks to be given extra powers to supervise content shared online. Data Compliance Europe said it was not the appropriate body to do so.

Finally, State-broadcaster RTÉ recorded a loss of €13 million in 2018. The company blamed “special events”, such as the papal visit, the presidential election and its coverage of the Fifa World Cup, which it said cost it a combined €7.2 million.

9 Irish whiskey sales near milestone of 12m cases a year