Donald Tusk lays into London with both barrels on Brexit

Business Week: EU warning for the State; bad news for house-hunters; and the banks

The Irish border is to be the primary issue for Europe in the Brexit negotiations according to European Council president Donald Tusk has said. 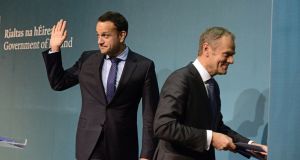 European Council president Donald Tusk appeared measured, and spoke in a calm, even tone – but, boy, he did not mince his words.

Tusk, in Dublin to update Taoiseach Leo Varadkar on the Brexit negotiations, was addressing suggestions from the United Kingdom that other issues could be dealt with in advance of talks on Irish issues and the avoidance of a hard border.

“My response would be: Ireland first,” he said. “While we must respect [the UK’s] position, we also expect the UK to propose a specific and realistic solution to avoid a hard border.

“As long as the UK doesn’t present such a solution, it is very difficult to imagine substantive progress in the Brexit negotiations. If, in London, someone assumes that the negotiations will deal with other issues first, before moving to the Irish issue, my response would be: Ireland first.” Over to you, Ms May.

Earlier in the week, Varadkar might well have choked on his avocado toast when he heard British prime minister Theresa May suggest the Canada-US border could serve as a model for the Border in Ireland after Brexit.

Varadkar visited that region last summer to see for himself, and flatly rejected May’s idea. “I saw a hard border, with physical infrastructure, with customs posts, people in uniform with arms and dogs,” he said. “That is definitely not a solution that we could possibly entertain.”

In midweek, Tusk wrote to member states setting out the broad principles of a post-Brexit free trade agreement between the European Union and UK. It suggested free trade in goods in all sectors with zero tariffs.

Tusk then delivered another volley at London, pointing out that the UK’s red lines have severely restricted EU options for any future deal. “It should come as no surprise,” he said, “that the only remaining possible model is a free trade agreement”.

“Our agreement will not make trade between the UK and the EU frictionless or smoother. It will make it more complicated and costly than today, for all of us. This is the essence of Brexit.” Ouch.

Meanwhile, the EU said the payment of funds to support investment in the State could be accelerated to help cope with the shock of a hard Brexit, should that come to pass.

There was a sobering reminder for anyone getting carried away with all the jobs announcements and cheery news of the economy, as the European Commission warned that a lot of the State’s revenue comes from “uncertain” sources.

While the Government will point to announcements totalling almost 1,000 jobs this week – 600 of which will come from US medtech group Edwards Lifesciences – the commission called for measures to safeguard against choppier seas.

In its winter reports on member-state budget programmes, it said the majority of revenue-raising measures introduced in Budget 2018 are “biased towards uncertain tax bases” and could undermine future State revenue.

It pinpointed the Government’s increased reliance on transaction-based taxes as a key risk factor. In particular, it highlighted the recent increase in the stamp duty rate on commercial property transactions from 2 per cent to 6 per cent.

The commission also noted that Government revenue from corporation tax, as a proportion of total taxation, continued to rise, but said that, as a tax base, it was “ highly concentrated and prone to volatility”.

On that note, it also emerged the State has selected BNY Mellon as custodian to oversee the management of about €14 billion of back taxes and interest it has been ordered to collect from US technology giant Apple.

Meanwhile, the latest exchequer returns showed Government tax receipts were marginally below target in February on account of softer-than-expected VAT numbers, which the Department of Finance linked to monthly VAT rebates.

Exchequer returns for the first two months of the year show the Government collected €7.8 billion in tax, which was €228 million or 3 per cent up on the same period last year.

Corporation tax, which has generated record returns for the Government in recent years, came in at €213 million, 7.1 per cent below target.

There was more grim reading for house-hunters as a survey published by Banking & Payments Federation Ireland outlined the difficulties faced by first-time buyers and those looking to trade up.

Anyone in Dublin looking for an upgrade will now need a deposit of about €140,000, while the median income for first-time buyers has shot up to €70,000.

According to the survey, incomes of first-time buyers (either based on a couple or an individual) who succeeded in obtaining a mortgage rose by 5.4 per cent over the year to December. This is far higher than national wage growth, which is about 2 per cent.

Elsewhere, Irish homebuilder Cairn Homes claimed that buying a home rather than renting will save you almost €500 a month in Dublin.

The company, which published its annual results this week, also said it expects to sell its Hanover Quay apartment block for up to €105 million at current values, leaving the builder with a potential €40 million gain. The development in the capital’s docklands will have 120 dwellings, a gym and restaurant.

Meanwhile, a Bill put forward by Fianna Fáil, proposing a new organisation with wide powers to deal with mortgage arrears, was heavily criticised by the European Central Bank, which said it may undermine legal certainty for lenders.

No AIB bonuses and Bank of Ireland departures

There are few topics more politically toxic than that of bonuses for bankers, and Minister for Finance Paschal Donohoe this week said he would not commit to backing the return of bonuses at State-controlled AIB “at this stage”.

Over at Bank of Ireland, three top executives look set to leave in the coming months.

Meanwhile, Lewis Love, who had rejoined the bank in late 2016, has decided to leave the bank “to spend more time with his family, travel and pursue other opportunities”.

In addition, the bank has appointed Gavin Kelly as chief executive of its largest division, Retail Ireland, replacing Liam McLoughlin, who signalled his departure in January.

5 Moving to a right-sized home: What are your options?