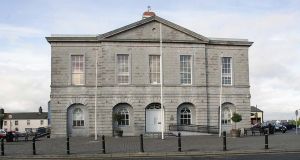 A decision on the future of nine court venues in Cork, Offaly, Mayo, Meath, Monaghan and Wicklow will be made at a Courts Service board meeting this month.

The proposed closures will have a negative impact on access to justice, particularly for the less well off, solicitors groups have said.

As part of a review of 96 venues outside Dublin and Cork city last year, the Courts Service listed 41 for possible closure. So far, 19 have gone to public consultation. Nine of these – Edenderry and Birr in Co Offaly, Skibbereen and Kinsale in Co Cork, Ballyhaunis and Swinford in Co Mayo, Baltinglass in Co Wicklow, Clones in Co Monaghan, and Kells in Co Meath – will have a decision made on their future at the end of this month.

The shortlist for possible closure was drawn up by the Courts Service building committee on the basis of a points system. Points were awarded for physical condition, annual case count, ownership, on-site holding cells and other factors.

The maximum number of points available was 62. Kinsale and Ballyhaunis both scored eight, Swinford 10, Edenderry and Clones 11, Skibbereen and Baltinglass 13, and Birr and Kells both scored 15.

Concerns raised
Local solicitors have raised concerns about the criteria used and questioned the thinking behind the rationalisation plan.

Pat O’Connor, managing partner at O’Connor & Sons in Swinford, said the effect of closing Swinford courthouse would be to denude south and east Mayo of all court sittings.* Thirteen courts had closed in the area already, some near Swinford, but instead of moving court lists into Swinford, they were moved to other venues such as Castlebar.

“This was a way of ensuring that the results that they wanted were achieved by creating the transfer of cases, not to the nearest court venue but to a good distance away,” O’Connor said.

“They set the criteria for Swinford to get the desired result; they decided on the result first and then they worked backwards to get the score to fit into it.”

He said they also failed to take into account the case load for the Circuit Court, which also sits at Swinford, and the Coroner’s Court.

O’Connor said the “micro effect” of the closure of the courthouse might have some small effect on the overall running costs of courthouses in Co Mayo, but the macro effect, on service-users like the Garda, the Probation Service, solicitors and the public particularly, would be “to increase very substantially and significantly the overall cost of attending court”.

Edenderry solicitor Nevan O’Shaughnessy, who sent a submission to the Courts Service on behalf of local solicitors, said Edenderry courthouse was awarded six out of 10 for physical conditions but was in “perfect shape”. He said he was aware solicitors had “a vested interest”, but it was the ordinary people who would suffer, along with local businesses whose trade gets a boost every time the court sits in the town. “The Court Service report on Edenderry itself says the hours of the local bus service [to Tullamore] are not conducive to court business,” he said.

The same report also said €3,890 would be saved annually by the closure and even this figure was “hopelessly wrong”, he said, when additional costs for gardaí travelling to Tullamore, the suggested alternative, were taken into account.

He said there was a concerted effort by the Courts Service to “come up with excuses to close courts”, but in reality it was “a clear policy decision by the Government to centralise services”.

Recent refurbishment
Brian Morgan of Morgan McManus solicitors, in Clones said the courthouse there was refurbished at a cost of almost €1 million three years ago, but only scored eight out of 10 available points for condition and no points were awarded for wheelchair access.

He said the closure of Clones courthouse would really affect private citizens who would have to travel to Monaghan town. People who were less well off would be most affected by this, he said, as there was no suitable public transport system.

Maura O’Donovan, secretary of the West Cork Bar Association, said the biggest concern was access to justice for Cork citizens. District court venues had been reduced from 12 to six over the past 10 years. There was very limited public transport, she said, and there was a possibility people would not pursue cases because of the increased access and delays the amalgamation will cause.

A spokesman for the Courts Service said the transfer of court cases from underused court venues to larger centres nearby would generate some savings in day-to-day costs, and more in the costs of long-term upkeep, maintenance and refurbishment.

“But more importantly, such moves free up judicial and staff time to deal with more cases, over full days, in busier locations,” he said. This would help the Courts Service and the judiciary to further save time, reduce waiting lists to have cases heard and facilitate family law days, children’s hearings and licensing courts more easily.

“This is particularly important when the service is working to maintain service levels in an environment of continually reducing staff numbers and other resources. It is the flexibility sought in the Croke Park agreement being put into action.”

The spokesman also said that of the €900,000 spent in Clones, some €200,000 was contributed by the Courts Service and the balance by the local authority. The upgrade also included local authority services, a theatre and other facilities. Only 350 cases were held at Clones in 2012, he said, the equivalent of 31 cases per sitting. “There just isn’t the demand for it.”

He added that refurbishment work on Edenderry was carried out 15 years ago and had “paid for itself”.

* This article was modified on July 12th to correct an error