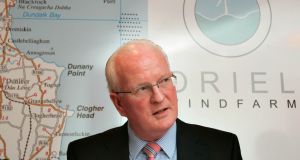 Mr Britton, who trained as an accountant and worked with KPMG, was also a founding director of the British Irish Chamber of Commerce.

A Rossnowlagh native who moved later to Blackrock, Co Louth, he was managing director of Oriel Windfarm, which announced only four months ago that, with a joint venture partner, it would deliver Ireland’s first commercial-scale offshore wind farm in the North Irish Sea.

Back in Donegal, he was regularly referred to as the “father of surfing” for his involvement in the sport both as a champion participant and an administrator long before it became a widely popular pastime in Ireland.

He was also involved in the hotel business, taking over his parents’ business in the Sandhouse hotel in Rossnowlagh, when they retired.