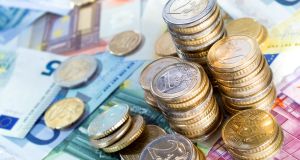 Ireland’s top stockbroker, Davy, took a reputational hit as the Central Bank levied a record €4.1 million fine on the business and Minister for Finance Paschal Donohoe called for a public reaction from the firm. Joe Brennan reports on a seven-year saga.

Stockbroking peer Goodbody’s has finally closed a deal to sell itself at the third time of asking. After two failed courtships, Ireland’s second largest broker returns to the AIB fold in a €137 million deal after the bank secured permission to continue to pay bonuses to staff in the business despite the ongoing fatwa on such payments for bankers. Joe has the details.

Hotels veteran Pat McCann has announced he will step down as chief executive of Dalata, the business he founded in 2007 which is now the State’s largest hotels group. Mark Paul spoke to him about a legendary career and the outlook for the group.

Covid is knocking a €14 billion-sized hole in the Government’s finances with Exchequer figures showing that tax receipts are down around 9 per cent and spending is 20 per cent up on the same period last year – both due to the impact of the pandemic. Eoin Burke-Kennedy reports.

AIB became the third of the big three Irish banks in three days to tell customers of disruption as it right-sizes its business, closing a number of branches in Dublin, Cork and Galway, writes Colin Gleeson.

Executives at building materials group Kingspan have seen their remuneration fall more than 20 per cent after they missed out on over €3 million in bonuses for 2020 following some unwelcome attention for the group at the UK inquiry into the Grenfell fire that killed 72 people. Barry O’Halloran reports.

In her column, Fiona Reddan wonders at the regulatory focus on dual pricing in the insurance market when such practices continue unhindered in the far more costly mortgage lending sector.

And in Commercial Property, Ronald Quinlan writes that a consortium of investors assembled by AIB and Goodbody is looking to sell its interest in Facebook’s new European headquarters in Ballsbridge. The four-block complex is expected to command a guide price of about €380 million.

The demand for warehouses around Dublin continues, with four properties in Rathcoole and Baldonnel likely to fetch close to €80 million.

And in the market’s other hot sector, private rented development, strong interest is expected for a ready-to-go site in Tallaght, with permission for 196 rental apartments, which is guiding €7.35 million.

Finally, in what is unfortunately likely to be one of the first of many such sales, a former café/retail unit on Galway city’s famous Shop Street has been brought to the market with vacant possession at a guide price of €1.6 million.